Bolgatanga: Land of clay and rocks 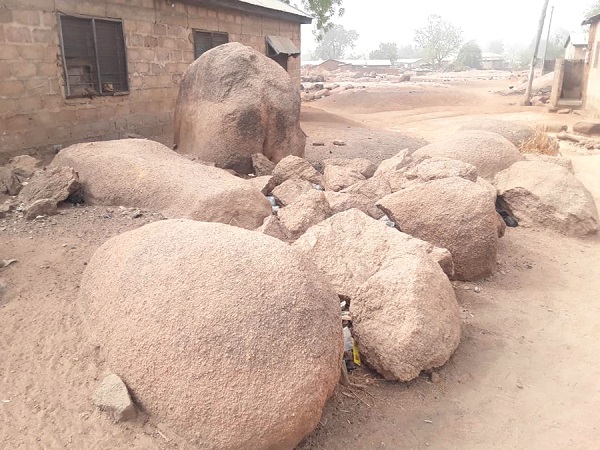 Bolgatanga: Land of clay and rocks

The Upper East Regional capital, Bolgatanga, colloquially known as Bolga, was derived from the Gurune language words: bole (clay) and a (rocks). The Bolgatanga land, therefore, has a mixture of clay and other rock formations and this encapsulates what exists in the entire Upper East Region in terms of topography.

Historically, Bolgatanga is situated at the southern terminus of the ancient Trans-Saharan trade route. The eastern route converged with the Sahelian route, near Bolgatanga. Along the route, handicrafts, especially straw baskets, hats and fans, as well as leather goods, metal jewellery and indigenous attires, were exchanged for kola and salt.

Bolgatanga is the capital of the Bolgatanga municipality and closer to the border with Burkina Faso around Paga.

Bolgatanga is 161 kilometres (about 100 miles) to the north of Tamale, the Northern Regional capital. It lies in the Red Volta River Valley (which serves as a major migration route of elephants), with the White Volta River and the cliffs of the Gambaga Escarpment to the south of the town forming the southern boundary of the Upper East Region.

The Upper East Region is one of the 16 administrative regions of the country, occupying a total land surface area of 8,842 square kilometres or 2.7 per cent of the total land area of Ghana.

According to some geological studies, clay is the oldest known ceramic material and a common component of the sedimentary rock. Therefore, clay and limestone that are both derived from sedimentary rock play a major role in some of the region's potential.

The potential includes the pottery and arts industry, the ceramic, tiles and cement industries. Other forms of rock deposits are also important in the quarry and the mining industries.

While the potential of some of these industries are being exploited, making it possible for some residents to derive maximum benefits from them, others have not been fully tapped for investment purposes and development of the region.

It would, therefore, be worthwhile to delve into what the region stands to gain if these rock and clay deposits were fully exploited and developed.

For one thing, almost every nook and cranny of the region is covered with some rock deposits or formations that create an alluring scenery.

Underlying that admirable scenery created by the rocks is a lot of treasure, which has perhaps not engaged much attention of potential investors.

Types of rocks and zones

The Geological Survey Department (GSD) in Bolgatanga says the geology of Ghana is divided into six main types of units, systems, terrains or series: the Birimian, Voltaian, Tarkwaian, Buem, Togo and the Dahomeyan systems.

There are also three main types of rocks, which are the igneous, sedimentary and metamorphic rocks.

The sedimentary rock is often deposited in layers and frequently contains fossils. The metamorphic rock on the other hand arises from the transformation of existing rock types in a process called metamorphism, which means "change in form".

The original rock is subjected to heat and pressure, causing profound physical or chemical change.

The Upper East Region, which falls under the Birimian system, is made up of a mixture of metamorphosed volcanic, sedimentary and plutonic rocks (a type of igneous rock that solidifies from a melt at great depth and is later exposed by erosion).

It is also made up of low-grade metavolcanics (a type of metamorphic rock first produced by a volcano) and lastly metasediments (a type of sedimentary rock that shows evidence of having been subjected to metamorphism).

Almost half of the terrain consists of alkaline granites (a light-coloured igneous rock with grains large enough to be visible).

The Birimian rocks are major sources of gold and diamonds that extend through Ghana, Côte d'Ivoire, Guinea, Mali and Burkina Faso.

They are named after the Birim River, one of the main tributaries of the Pra River in Ghana and the country's most important diamond-producing area.

Further checks at the GSD, which has done extensive work and research into about 80 per cent of the rocks in the Upper East Region, also reveal that the Sandema area in the Builsa North municipality has granite rocks, while in the Navrongo and Sirigu areas in the Kassena Nankana municipality and West District respectively, there are clay deposits.

This explains why for instance the Sirigu community is now synonymous with the pottery industry. The establishment of the Sirigu Women's Organisation for Pottery and Arts (SWOPA) has further helped in exposing the potential of that community to the international level as the clay deposits are being utilised to produce pots, flower vases and drinking mugs, among others.

The Chiana, Paga, Bongo and Tongo areas have all been cited as areas that have a big potential for rock exploration.

A geologist, Mr Silas Bobi, in an interaction with the Daily Graphic noted that there was the need to concentrate on the industrial type of minerals abundant in the region such as clay, sand and granite.

He explained that the region had a lot of granite which could be polished into tiles and monuments. The granites could also be used to construct roads, he said.

“A polished natural granite is more expensive than a regular tile and the region can make a lot of money from it," Mr Bobi further stated.

Other benefits of rocks include the production of cement derived from limestone, chalk, sandstone for building materials and bath scrub, as well as gravels for road construction.

Economic mineral deposits such as gold, diamond and manganese can be found in some of the rocks.

The Upper East Region also has many rock sites that serve as tourist attractions.

Mr Bobi added that the region had to explore and possibly develop its “Radio Active Rocks" potential.

He explained that some of the naturally occurring elements within the rocks could be used to produce nuclear energy.

He maintained that those types of rocks, when fully developed, could be exported.

The radioactive rocks could be harmful to human health, which was enough reason for more exploration and research to be done in that regard, he said.

The Bongo District Chief Executive, Mr Peter Ayinbisa, for his part was of the view that investors were needed in the district to help develop the cement industry, ceramic tiles and roofing sectors.

He intimated that studies had shown that the rocks around the Zorkor area in the Bongo District could be used to produce cement, while the huge deposits of clay at Bongo could also be used to produce roofing and ceramic tiles for the next 42 years.

Upper Quarry Limited was the first quarry to be established in the region in October 1980. However, commercial operation started in 1983.

Documents available at Upper Quarry have revealed that the major rock outcrop in the Pwalugu area is made up of muscovite-biotite (a clear, silvery or coppery silver in colour and black) granite rock.

This granite rock is among others used for crushed and broken stone. These are crushed and broken granites that provide aggregate for concrete and also suitable for road surfacing material. It is a common raw material for the construction industry and it can also be used in terrazzo works.

Checks at the Minerals Commission (MC) in Bolgatanga also reveal that so far, there are six quarry companies in the North East and the Upper East regions.

They are the Adom and the Arigu quarries in the North East Region, MyTurn Quarry at Chuchuliga, the Upper Quarry and Mawums Quarry both at Pwalugu and one at Bazua in the Binduri District.

Records at the MC also show that findings of a research have identified the Chiana, Naaga, Bongo and Talensi areas as having huge potential for industrial mineral deposits. The research also recommended and encouraged investors to take advantage of the potential the region had in the area of industrial minerals.

The business of quarry is, however, highly capital-intensive.

A 2019 project appraisal and impact assessment of what an investor needs to be able to site a quarry in the region available at the MC showed that about GH¢5,597,900 will be required to establish that industry.

Checks at the Upper Quarry Limited also revealed that a minimum of US$2 million was required to establish and operate a quarry. Additionally, an investor needs to inject capital into the business every five to 10 years to replace key machinery.

They include a delay in the development of the road and transportation network, including rail lines for the region, and insufficient energy or power framework for mining industries to use.

In spite of the challenges the region faces in developing and marketing the industrial minerals, there are prospects.