Be careful what you wish for others; They Will Always Come Back To Haunt You Yourself 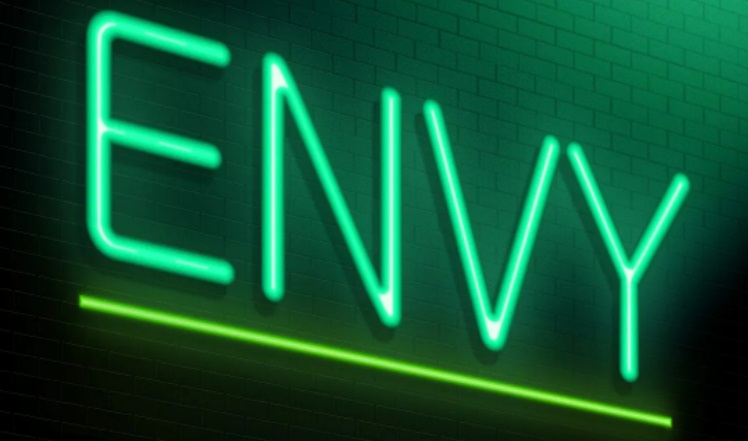 ENVY, we are told, is a ‘SPIRIT’, it possesses a person and if he or she isn’t conscious of this ill, the tendency is, it will lead you to an early ‘grave’.

In short, envy is a virus, an ultramicroscopic, metabolically inert, infectious agent sometimes that replicates not only within the cells of a person but could also grow and fester within a family or group of people or political opponents or members of a society as it is composed of a DNA core as a disease.

It also has a corrupting influence on morals or the intellect and simply act as a poison. Truth be told, it is a disease, germ if you like, an infection, a sickness, especially when it becomes a rallying or clarion call for a group of people or of a certain socio-political persuasion to manipulate and turn it into a national plan to execute to the detriment of others who don’t think like them, or believe in their life’s ideology.

Envy, also as a spirit, becomes a feeling that consumes a person to the point of insanity, making such a person never satisfied with himself or herself to the level of hating one’s self; resentful and blind to all the good that is in this person; but only conscious of what another possesses. It is this feeling of desiring to the point of coveting something that belongs to another person, including an innate or in-born or natural or a thing as one’s talent as artistic abilities or artistry or gifts like a voice or singing.

You see, ENVY goes hand-in-hand with HATRED, that intense dislike or ill-will to showcase an arousing hatred, spiteful (as motivated by malice towards another as if full of grudge).

ENVY, when it becomes a political weapon, destroys a nation and the cohesion of her people, especially when there is a group of people in government, whose sole agenda is to amass for themselves or monopolize the resources, opportunities, capital, wealth, assets, fortunes, substance, worth, riches and reserves meant for the general good to the exclusion of others or their perceived ‘enemies’.

Many people have pre-maturely perished on this journey called ‘LIFE’ because they were oblivious of the impact of this evil or canker called ‘ENVY’, especially as more often than not it comes from those very close to the victims of the resulting or manifesting acts, so the real intent is lost for the lies being perpetuated to be believed.

Guess, you can now somehow understand and appreciate the extent or depth of this virus in our national body-politic towards the man, Kwame Nkrumah – the OSAGYEFO, especially in the days after his overthrow, acts never again to be visited on any Ghanaian politician since: books that were burnt to desecrate his works and achievements. No wonder, parts of our history as a people and as a nation, are always distorted to deny him his true place in our history.

Remember how Osagyefo, Dr. Kwame Nkrumah was accused of being the worst ‘dictator on earth’, taking away every perceivable freedom that Ghanaians had during his tenure as the Prime Minister and later as President of Ghana in the First Republic, how he wouldn’t allow anybody, not even his Ministers to talk about anything against decisions he had made; how he was accused as ‘Kankan Nyame’ from a fetish in Guinea?

Fast-track to recent years and tell me, how people are virtually afraid now to even answer to their names in public when called for fear of victimization, or arrest or incarceration; how the Police was using permits to deny people from lawful demonstrations? How simple answers to questions from the Presidency, such as the names of the Presidential Staffers at the Jubilee House have suddenly become a taboo to ask on the list of expenditure in respect of COVID-19 or accounting for moneys accrued to fight the pandemic has become a taboo? So I ask, did we go or did we come?

You see, a nation destined to become a ‘PEOPLE OF GIANTS’ will turn into a ‘NATION OF DWARFS’, when we allow the spirit of envy to fester and grow even with babies in their mothers’ wombs, when we refuse to give credit and due to those, who have rightly earned their places of honour in history.

When we deliberately distort our history as a people and a nation, to delineate others of their own places in history by a subtle attempt at re-writing anything because you occupy a place of authority, be very careful by the docility of the people, or by their silence, if you are inclined to believe that to be an acceptance of the ‘new history’. They are only waiting for your exit and re-visit the subject once more and exact the necessary corrections for the true history.

When you wish things or incidents or situations for others, especially bordering on their demises or erasing their pasts because you feel threatened by their achievements out of this spirit of ‘envy’, just be careful of the consequences in due time or their perceived ‘SILENCE’ or their ‘HMMMMMMMMM’?

From where I sit, some of our churches or religious leaders are also not helping: when they ought to be speaking to our leaders of all sorts, about the little things they do that hold great consequences for our people and for us as a nation, they out of conveniences keep their silence and then we get us into situations of dire consequences, which we could have avoided.

Our politics, from the days of Colonial Rule through the agitations of the Aborigines Rights Protection Society (ARPS) to the several agitations ending in the elections of Kwame Nkrumah as Head of Government Business and onto the First Republic, through the Second, the Third to the Fourth, have always come with the betrayals of main political characters and players by their most trusted colleagues and confidants, who turn out to play major ‘treasonable’ roles that eventually led to the military uprisings that curtailed the governments of the day to military takeovers.

These persons have always from the point of ‘envy’ sought to betray the causes that they once held sacred, defended and ready to sacrifice their lives and for ‘thirty pieces of silver’ as Judas Iscariot collected to betray Jesus Christ, executed same to the detriment of the general good of our people and the nation.

They have always refused to see beyond their noses and ended up cutting their noses to spite their faces and the general good of their people; they have risen on the back of the agitations from the cries of the same people and on reaching the pinnacle of power forgotten exactly what propelled them to the zenith of national power, authority and governance. Maybe out of the largesse of the offices they now occupy, they easily forget or refuse to recall or remember the several attempts or numerous demonstrations they have led or been part of in the past to the extent that they turn ‘tin gods’, determined not to tolerate new agitations.

They conveniently pretend or at this point, forget their own actions during the tenures of past governments and seek to use the power of their new offices to deny the same rights they had to enable their agitations.

Where we have reached with our Fourth Republican Dispensation, we all need to be mindful of the texts of Romans 13:11-13 or 2 Corinthians 6:1-2 as they both relate to KAIROS MOMENTS, a time when conditions are right for the accomplishment of crucial actions – the opportune and decisive moments of life for change.

Kairos Time calls for action, conversion and transformation; it is not just crisis but opportunity and favour to take advantage of or creating a perfect moment to deliver a particular message or action; and in articles such as this, others employ ‘Kairos’ to create decisive moments, such as trying to capture in words what will be immediately applicable, appropriate, and engaging for a particular audience, It is timeliness, appropriateness, decorum, symmetry, balance of being aware of the rhetorical situation.

You see, when out of envy, you wish to cause the downfall of another, you are blinded just like Judas Iscariot not to see the real import of the moment, the KAIROS TIME, when things not only turn round to haunt you yourself but also go to elevate the one you seek to destroy, either his character or whatever you are envious of – this is what is killing our nation and our people: ENVY, plain and simple.

Funny that people sometimes try all means possible to get into office just to show others where power lies and before they are aware, everything they pontificated about against the past government or people, are the same perceived ‘crime’ or mistakes they themselves are now committing: ‘IRONIES OF LIFE’.

Trust me, A CHANGE IS GONNA COME, sooner than later, when the past will cease to influence our future as we will have a new breed of leadership, who will place the nation and the people FIRST ALWAYS before the personal aggrandizements. Need I say more?

By Magnus Naabe RexDanquah, the Ghanaian - is a Land Economist & Appraiser, Events Architect & Planner, SportBusiness Consultant, Social Commentator and an Author. He secured the rights for Ghana to prepare to host and organize the 13th African Games in Accra in 2023.