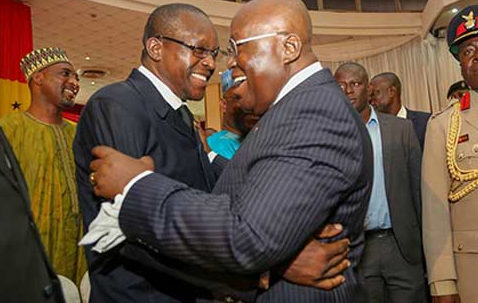 The law may be an ass, but it is a very discriminating ass. It will not allow just any idiot to sit on it, especially if the idiot also happens to spot a sore or a piece of dirt on their backside.

Even in its tainted state, however, the law is king. It decides which idiot’s case wins the day, and it will, in the case involving Adwoa Safo, if Alban Bagbin insists on having his way with his “Old Lady”.

The Supreme Court may soon be called in to decide if it lies in the power of the Speaker (any Speaker) to make a ruling in a case determined by the Privileges Committee?

The committee had delivered a split decision on the fate of Adwoa Safo, who has been absent and out of Ghana beyond the mandatory 15 days without permission.

To my untrained mind as a non-legal person, this is all a lot of hoo-haa. In the first place, why did the Speaker not consult the “Old Lady” on the committee’s determination that the excuses from the two other MPs, Kennedy Agyepong and Henry Quartey, were tenable?

So while there are more important matters of state, the country is waiting for the Speaker to, as he puts it, “consult the Old Lady”.

Which “Old Lady”? In constitutional matters of this nature, does the law make provision for consulting any person or group apart from the law?

Is our current Speaker not unnecessarily and needlessly dramatising matters in the House? As a democracy, we must test the law, yes, but must we go to court even on how to brush our teeth?

I am taking note that under Speaker Bagbin, our Parliament is having to split too many hairs. This is a Speaker who has warned the ruling party that it would lose the next election!

I don’t care if he chooses to traditionalise or Ghanaianise the Office of Speaker by appearing in the House clothed as a Ghanaian chief. I actually do applaud that.

I also don’t mind if a critically ill Speaker has to be rushed out of the country on medical emergency.

Since the money belongs to the taxpayer, however, this taxpayer must be told if Ghanaian medical doctors pronounced that his health condition had no solution in Ghana.

I think that all of these medical trips for important people would be unnecessary if we stopped misapplying Ghana’s money (e.g. over allowances to Article 71 overlords) and used it rather to equip, at least, our tertiary health institutions.

Back to Adwoa Safo.

Are the National Democratic Congress (NDC) Members of Parliament (MPs) not behaving like the chap who wailed louder and longer than the bereaved?

While her own New Patriotic Party (NPP) has not hidden its desire to see the back of her as an MP, the NDC seems to be out to rescue Adwoa Safo.

The NDC are only being smart, like any serious political party, with an eye on electoral advantage. My information is that while the Dome Kwabenya seat may, since 1992, have voted blue, it could, like all other orphaned strongholds, do an about-turn or deliver dwindling numbers.

Whispers are that non-residents of the constituency arrive in bus-loads from the church of Adwoa Safo’s father every four years to register and to vote. Implication is that without Adwoa, such beef-ups may not be forthcoming, thus trimming NPP’s electoral fortunes.

Outside of NPP/NDC politics, should it not be a matter of concern to Ghanaians that absenteeism is reducing the quality of debate in our Parliament?
It has been revealed that some “Honourable” members report to sign the attendance book and leave for their private business.

While at it, we should also be worried by Article 78 (1) of the 1992 Constitution that requires the President to appoint the majority of his ministers from Parliament. The arguments for this provision fall flat in today’s reality that the affected MPs are kept too busy by their ministerial functions and are therefore unable to make it to Parliament.

They only turn up when their votes are needed. More anon.

Did the President hear or see the NPP foot-soldiers noisily insisting that he needs to reshuffle his Cabinet? Does Akufo Addo know why the king danced naked?

It is because nobody, apart from his wife, children and nephews/nieces, dared to whisper to him that his clothes were off.

Akufo Addo cannot be right when the four million in his party and 30 million Ghanaians think his ministers are not performing.
Ministers cannot be said to have performed when, for the first time in over 30 years, inflation has exceeded 30 per cent, and when all the rating agencies have downgraded us.

These are not usual; they are a symptom.