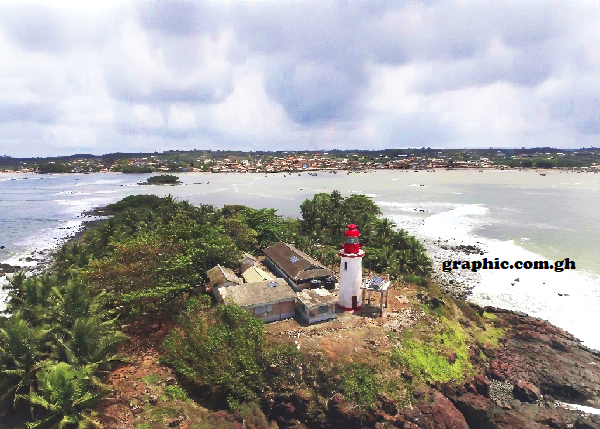 A lighthouse is a towering building or other types of structure designed to hold lamps that beam spotlights used as navigational aid for maritime pilots or on inland waterways.

The Axim Lighthouse, located on the Bobwasi (Bebo Arezi) island, about a kilometre off the coast of Axim, is one of the seven lighthouses along Ghana’s coastline across four regions.

These are the Woe Lighthouse, near Keta in the Volta Region; the James Town and Chemu Point Lighthouses in the Greater Accra Region, and the Fort William Lighthouse at Cape Coast in the Central Region.

The Western Region has three Lighthouses — Fort Orange in Sekondi, the Cape Three Points Lighthouse, and the Axim Lighthouse.

While Axim houses the westernmost lighthouse before Cote d’Ivoire, the Woe Lighthouse is the easternmost, before entry into Togo.

The Axim Lighthouse was built around 1915 and it is managed by Ghana Ports and Harbours Authority (GPHA). With some of the original parts of the lamp broken down, the GPHA refurbished it with a new solar-powered light, with new wiring and controls.

The Bobwasi island which houses the lighthouse used to be a very thick forest. It is believed that there were dwarfs on the island/forest, so people were not allowed to go there.

According to legend, one day, a native by name Arezi secretly went there out of curiosity. It is believed that he was mercilessly beaten by the dwarfs in such a way that he could not return home that very day.

The following day, his people after a search found him alive, but very weak because of the beatings, hence ‘bebo Arezi‘, which in the Nzema language literally means "they’ve beaten Arezi".