Ave: where people, crocodiles live together 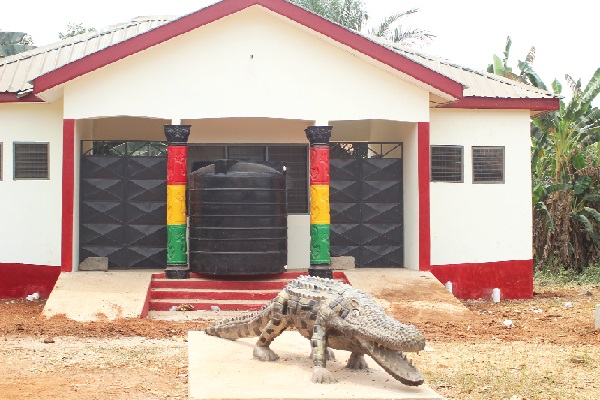 His shrill whistle sounded in quick, short waves. As the whistling sound pierced the air, the calm water in the dam turned into ripples and two giant crocodiles glided towards us.

Fudzishie Egbor, a 60-year-old traditional priest from Ave Dakpa, has a rapport with the crocodiles. He knows them all by name and they always respond to his calls. He says he has been feeding the crocodiles with chicken for more than two decades.

Crocodiles may be one of the deadliest reptiles on earth and in most places, the sight of a single crocodile is enough to send locals scurrying in fear, but not in Ave Dakpa, which is 58km from the Volta Regional capital, Ho.

In this community, it is not unusual to see the locals living cheek by jowl with the reptiles which are considered extremely dangerous. Women in the town wash their clothes close to the crocodile pond, livestock drink from the pond and children also play nearby.

Ave is densely populated and dominated by agricultural fields with virtually no forest cover, so it is an unlikely area for freshwater predators. Yet, the people have always lived alongside the crocodiles and continue to do so with minimal conflict.

“The crocodiles come out only if they are called,” a housewife told the team of Daily Graphic reporters, as she fetched water from the dam.

We were not on a wild life safari, we were at the crocodile dam site, scanning the surface of the water beyond a rough road which passes through the town.

The dam looked like any ordinary one, but lurking among the fuchsia blossoms and green pad water lilies were different species of crocodiles, and the villagers such as the housewife who spoke to us knew the reptiles’ habits from generations of coexisting with them.

Rural ecotourism destinations are important elements in the promotion of Ghana’s tourism potential.

Like the Paga Crocodile Pond that records an average of 100,000 tourists annually, the Ave Crocodile Pond when developed could become one of the leading tourist sites in the country, due to its proximity to the newly built Ho airport and the Aflao border.

The District Chief Executive (DCE) of the Akatsi North District, Dr Prince Sodeke Amuzu, told the Daily Graphic that the assembly had initiated various projects to develop the dam which naturally harbours the crocodiles, into a super tourist resort in order to generate the needed revenue.

According to him, the first phase of the project, which involved training and taming of the reptiles, had been completed, adding that the crocodiles were now friendly and visitors could touch them without fear of being harmed.

He said revenue booths had also been installed to commence revenue collection from tourists.

The DCE said other projects initiated included the building of hotels and restaurants in the area, to make the site fully operational, stating that a private investor had already established a refreshment centre at the resort.

He said the assembly was looking for prospective investors to invest in the area to build a cultural village, hotels, restaurants and a children’s park that would develop the tourist centre and make it fully operational, adding that the assembly had secured nine acres of land from the chiefs, which were readily available for such purpose.

He estimated that the assembly would generate GH¢750,000 every year from the tourist attraction if well developed.