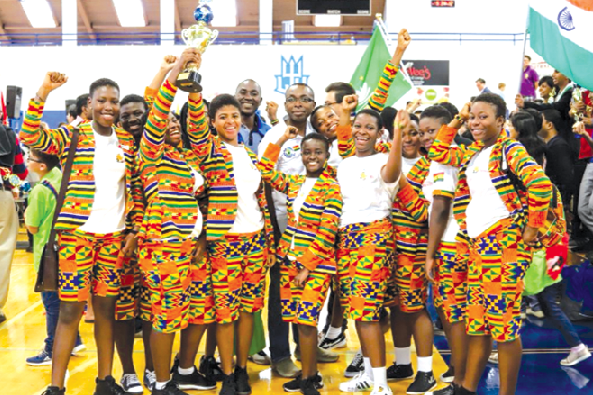 I am not sure how the acronym AUKNASE is pronounced but it stands for African Union Kwame Nkrumah Award for Scientific Excellence.

It is an annual continental prize awarded by the African Union (AU) to the African scientist considered to have done best in the fields of Science, Technology, Engineering and Mathematics (STEM) in the previous year.

Delighted at winning the award, Prof. Swai described it as a ‘sweet surprise’.

Coincidentally, the award was given on the 55th anniversary of the overthrow of President Kwame Nkrumah on February 24, 1966.

Described as the ‘African of the Millennium’, President Nkrumah is remembered permanently by this award in his name for his leadership and pan-Africanist drive for continental unity which time has vindicated him about.

In Ghana, the day passed quietly, except for a conference by the Convention Peoples’ Party (CPP).

Speaking on the BBC, Prof. Swai expressed her joy at winning the Kwame Nkrumah Award not only because of the prestige and the $20,000 cash prize, but more importantly, for the reason that she will serve as a role model to young African ladies to aspire to great heights in STEM.

This brought to mind the Methodist Girls Senior High School (SHS), Mamfe, who won an international world Science and Technology award in 2019.

The Methodist Girls High School (MEGHIS), Mamfe-Akwapim, is a relatively new institution founded in 1984. It was, therefore, a big surprise to many Ghanaians when they won the world Robotics competition in the International Science and Technology contest in 2019 in Oklahoma, USA. Indeed, that was the first time many Ghanaians heard of the school.

On Saturday, February 27, 2021, GTV documentary showed a rather sorry state of affairs in the school.

Starting as a private school called the Mamfe State College in 1984, it run into difficulties. In 1988, the Methodist Church took over and renamed it Methodist Girls SHS, Mamfe. Subsequently, it became a government-assisted high school in 1993.

For a young institution which has won such a prestigious international Science and Technology competition, one would have thought they have good facilities, but no!

Paradoxically, the school lacks basic infrastructure such as classrooms and dormitories. What little is available, therefore, is overcrowded.

Dormitory blocks which were started were not completed and now harbour snakes and birds.

Chemicals and reagents for science experiments are not ideally stored in an air-conditioned environment.

The school’s roads are untarred and rainy seasons are a nightmare as students walk through mud to their classrooms. Perhaps the biggest problem is water unavailability!

The Vice-President of the Parent Teacher Association (PTA)  made a passionate appeal through the Ghana Education Service (GES) to the government for assistance.

It is unbelievable that, with such rudimentary science equipment, Mamfe Girls won the 2019 World Robotic competition.

When the UK Sky news reported a British minister saying that, Ghana was the first of the world’s poorest nations to receive the Oxford-AstraZeneca COVID-19 vaccines under the COVAX arrangement, some Ghanaians were offended.

According to them, Ghana is not poor.

For these proud countrymen and women, I recommend they watch the 7 p.m. GTV and TV 3 news every evening for just two weeks.

Are these signs of a rich country?

Pride does not help especially where the country borrows so much and relies on donors, and has a debt to GDP ratio of about 70 per cent.

For a country which imports tomatoes/vegetables, rice, meat and even toothpick, it is difficult to understand how one can sincerely say, we are not poor!

STEM is what will transform Ghana from depending on imports for virtually everything. Indeed, that was what KNUST was established for.

The AU Kwame Nkrumah Award should, therefore, inspire Ghanaian scientists to achieve what the Tanzanian Prof. Swai has done.

From the brilliant performance of MEGHIS, Mamfe, one hopes that sooner than later, the prestigious Kwame Nkrumah Award will come to Ghana.

Ultimately, it is Science and Technology, harnessed by good leadership and discipline which will lift Ghana out of poverty like our ‘classmate’ Malaysia, (independent on August 31, 1957) whose 2020 GDP per capita was $12,000 as against Ghana’s $1,700.