Ashaiman; other side of the town’s origin 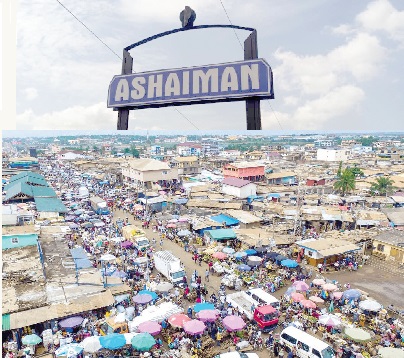 A section of the Ashaiman township
30.5k Shares

According to a great grandson of Nii Ashai- the man said to have founded Ashaiman- Ibrahim Nii Ashai, Ashaiman has never been called “Mpoase”.

But where from the name Mpoase?

Ibrahim Nii Ashai told the Daily Graphic that the name Mpoase came about due to conversations that usually took place among fishmongers who in the past came from the mountainous areas of Aburi, Akuapim among others to Tema to buy fish.

Narrating how that name came about, Ibrahim said when they (fishmongers) reached Ashaiman after trekking for a long time, they would go and greet Nii Ashai, the founder of Ashaiman and ask him, ‘mpo no asei anaa’? Nii Ashai will respond by saying, ‘mpo no asei” or ‘mpo no nsei ye’ meaning, there is turbulence at sea or not.

“If Nii Ashai says there is turbulence at sea, they would stay with him for some days until they hear that the situation has changed, meaning there is bumper harvest. Then they would go to Tema and buy their fish. This turned out to be the usual conversation between Nii Ashai and the traders from the mountains.

“So this is where the “mpoase” comes from. Everybody coming to Ashaiman was very clear in his/her mind that he or she was coming to Ashai’s Town (Ashaiman),” he said.

On how Ashaiman was founded, Ibrahim explained that Nii Ashai, originally a fisherman on the shores of Tema, moved to the area after becoming interested in farming and after a good harvest decided to settle in the village with his only son Nii Doku. He said over time, the name ASHAIMAN (Ashai's Town) was formed.