Africa sails its ship while building it 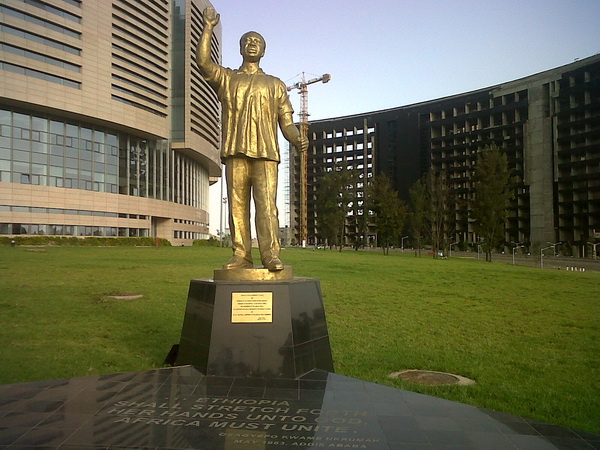 Of course who would not be sick and tired for being looked down on, and talked about in negative terms as if it was a mere backyard of the world. So it is time for Africa to arise!

As a matter of course, the building of a ship is completed through painstaking work before she is dragged gently to sail. But that cannot be the story of Africa! Waiting to complete building our continental ship before sailing while people continue to suffer and risk endangerment is unnecessary so there is a rallying call to fast-forward Africa’s development. (Yes, ships are females! Ships are containments of immense proportions that demand care and attention as a pre-requisite to enable them to give care and attention!)

I’m currently in Addis Ababa working on the side-lines of the African Union. Not surprisingly, the theme for the just-ended anniversary celebration is “Arise! Africa 2063: Prosperity and Peace.” In other words, by 2063—fifty years from now, Africa will finally become the toast of the world. So finally, African leaders are acknowledging the need for an African renaissance; a new beginning even while we sail; and a new awakening that rejects the excuses of the past.

For how long can Africa continue to blame its woes on colonialism? It is about time that this continent literally took the bull by the horns and focussed on solving its myriad problems. Yes, we were colonized—once upon a time. Yes, slavery and colonialism were two painful twin tragedies that were unleashed on our continent. But we must also admit that we have not been without guilt, for on own, we ourselves have inflicted some damage.

The Organization of African Unity was founded 50 years ago for the very noble purpose of yanking Africa from the apron strings of colonial masters. The vestiges and continuities of colonialism remain. But so what? Everyone, and every country has one painful history or the other. So it is about time for Africa (and Ghana!) to snap out of the old pains. It is about time for us to accept that many of our problems now are the result of bad leadership that is ably supported by lousy followership.

The OAU was liberationist. The AU must necessarily have a developmental orientation. The struggles, the fights, the wars, the machetes, the genocides, the inter-tribal hatreds, the confusion and all other self-destructive tendencies and practices must end. As far back in May 1963, our first President, Osagyefo Dr Kwame Nkrumah (whose statue stands gorgeously on the AU premises, declared: “Ethiopia shall stretch forth her hands unto God; Africa must unite!”

As I write, I’ve just returned from my first visit to the AU complex. What I can tell you upfront is that it is a vast complex. The most imposing super-structure on the premises is a 21-storey building—a gift from China! It serves as the headquarters of our continental organization. It is very beautiful. It fits Africa. It is both inspirational and aspirational. It represents where Africa should aspire to be. All things being equal, it should have represented what Africa is at present. But at least it provides something to look up to.

But the uncomfortable reality is that Africa could not build it! We sat down passively and helplessly for China to build it for us as a gift. Going by the legend of the Trojan Horse in Greek mythology, this gift could carry bad omens. During the time I spent in the imposing structure, I could not get this Greek mythology out of my mind. History provides rich lessons, just that people are bad students of history. The famous Greek mythology goes like this: Once upon a time, the Greeks tried several efforts and tricks to conquer fine city of Troy. Troy was fortified with high strong and impenetrable walls and equally befitting gates. So the Greek general, Odysseus, came up with a master trickster’s plan—to make peace with Troy by pretending to sail away. As was the practice of those days, the Greeks left a gift behind outside the walls. It was a wooden horse. But hidden inside were armed soldiers.

So with the Greek announcement accompanied with the Trojan conviction of a peace-making gesture to end the long-standing war, the Trojans dragged the horse inside, locked the city gates, jubilated, and went to sleep. Night time came. Whilst Troy slept peacefully, the Greek soldiers crept out of the wooden horse and effectively attacked and defeated Troy.

While this fine gift for Africa is serving the African Union very well because it provides it with a place of dignity from where to operate, there is still something very awkward about it. Current stories of the unleash of Chinese on African countries, some of who are engaged in acts that violate our laws with impudence, sound like stories of Greek soldiers stepping out in the night to conquer the sleeping absent-minded and trusting Troy.

In Ghana, Chinese citizens are regularly being arrested for engaging in small scale mining, an area that Ghana’s laws leave exclusively for Ghanaians. These are illegal acts that as a country, we are having problems in arresting. What is most disturbing is that these illegal mining activities are in the realm of surface mining that scrape the surface of the land and destroy it beyond usefulness for agriculture.

So Africa must beware of gifts, especially if they come from China! The fact that a fifty-year-old continental organization operated from make-shift, mostly rental accommodation scattered throughout Addis Ababa for years until the Asian giant stretched forth its kind hands to give us housing is at once sad and disappointing.

Isn’t it said that whoever pays the piper calls the tune? But more specifically, is this building one of the pretexts for the neo-colonialisation of our continent? When Ghana’s first president, Osagyefo Dr Kwame Nkrumah talked passionately about the dangers of new-colonialism, he must not have thought of China! The target of his suspicions was the western capitalist powers. But look at us now! It’s China!!

Africa is shaped like a question mark—with Madagascar as a misplaced dot besides instead of beneath the huge question mark. As Africa answers the bold question posed by its very shape, it must remain focused with a sense of determination to do what needs to be done to improve the quality of life of its citizenry. It is beyond unpardonable for a continent gifted with immense natural resources not to experience success, prosperity and peace. A renaissance is long-overdue.

The ship must sail successfully. The vessel cannot afford to crash. The African Union has set the year 2063 as a time to see the ship fully at sea, at par or superseding the rest of the world. Unfortunately, fifty years from now, most of us adults living now will be long dead and gone. Our bones will not know if our descendants are gathering good fruits from our present efforts or if we squandered our immense opportunities.

Written by Dr. Doris Yaa Dartey
The WatchWoman column,
Weekly Spectator
Email: This email address is being protected from spambots. You need JavaScript enabled to view it.