The sign, which became a symbol of the division of cold war Berlin and read like a dire warning to those about to venture beyond the wall – YOU ARE NOW LEAVING THE
AMERICAN SECTOR –in English, Russian, French and German – stood here.

It is today an iconic marker of territorial boundary and political division.

Until the fall of the Berlin Wall on November 9,1989, it signified the border between West and East, Capitalism and Communism, freedom and confinement.

Historically, the site is important because from 1961 to 1990 it functioned as the main entry and departing point for diplomats, journalists and non-German visitors who used to be allowed to enter East Berlin on a one-day visa after exchanging their Deutsch Marks on a one-to-one basis for East German currency.

More dramatically, United States (US) and Soviet tanks had a close encounter here in October 1961, when J.F.Kennedy and Nikita Khrushchev’s tanks faced each other in an acrimonious moment feared around the world as a possible lead up to World War III.

The wooden barracks which visitors to the Russian Sector (East Berlin) were once obliged to pass through for vetting was removed.

Reconstruction has included a US Army guardhouse and a copy of the original border sign.

The original white booth, which served as the official gateway between East and West, can be seen in the Allierten Museum in Berlin-Dahlem.

Cobblestones mark the exact spot of the former border and the poignant photography by Frank Thiel of an American and Soviet soldier can be seen here.

Memorabilia includes the nearby Cafe Alder (eagle), a hotspot for journalists and spies in the past where informers met their counterparts.

The museum, known as Haus am Checkpoint Charlie, contains the best documentation available on the many escape attempts from the East to the West.

Ironically, the new Berlin has turned this area into an entry, rather than a departure point, to a new kind of American sector.

Today’s Friedrichtra Be, with its Manhattan style office district, and its new buildings by international architects such as Philip Johnson, who created the American  Business centre, is the fruit of the millions in corporate investment, which rebuilt this central part of East Berlin in the 1990s.

Visiting Checkpoint Charlie, which is just few minutes’ walk from the IIJ institute was a very exciting experience and the guards on duty at the gate were exceptionally friendly.

Anyone who wanted to take a shot with them was allowed to do so but at a token fee of one Euro (The hordes of tourists we met there though, suggests they make a lot of money each day). 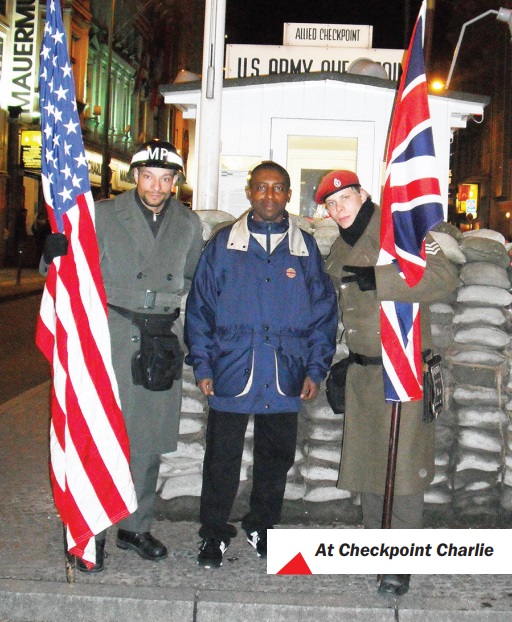 The next item on the carefully thought out IIJ programme was an exploration – more or less window shopping at shopping facilities. And my, what beautiful things we saw on our excursion.

But hey, that is a smart move by the Germans. Despite the fact that everyone who visits abrokyire would like to take back home a thing or two, I see it also as a way to boost their economy, by ensuring you spend some money before you leave – what better way to ensure much needed Euros remain in the country.

So it was that at exactly 2:30 p.m. our chaperons came for us to show us the places we could shop if we needed anything.

We took two buses – the now well-known M44 and headed in the direction of Buckow-Sud, Stuthirtenweg and alighted at Alt-Buckow. We then took another – our
first time of boarding a different one apart from our favourite M44.

This time it was bus M11,which was headed for S Schoneweide and we alighted at “U Johannisthaler Chaussee.

After few stops, we arrived at the huge shopping mall – the Galeria Kaufhof with a chain of shops just as we have at the Swanzy Shopping Arcade in Ghana, with the main difference here being the fact the Galeria looked bigger with a floor or two.

The interesting thing here is that one could stay in the building the the whole day shopping without even realising it.

The main wahala though was that all inscriptions on goods were in Deutsch and shop attendants were basically Deutsch speaking. Thus,our attempt to purchase some items was very difficult and we had to figure things out for ourselves – eyɛ nsɛm pii.