BY: Edmund Smith-Asante
Category: Features
With Susan (middle), a seminar assistant, and Thomas Arukaino, Nigerian colleague, in front of our apartment ready for a shopping experience. Follow @Graphicgh

I remember much later that this wahala became very evident when we shopped for some food items and basic necessities.

We could not get the right things we needed – I bought some margarine I couldn’t use because it was without salt and was thus tasteless, while a colleague had to use showering gel as pomade for some time before realising it was not the pomade he thought it was.

It actually did the reverse of what he wanted (made his face drier instead of making it moist to withstand the cold and dry weather) before he realised something was wrong. You can laugh over this, but it was serious.

But this snag in shopping notwithstanding, let me tell you about some very intriguing aspects of the bus we took most of the time which I noticed in no time and found very amusing. 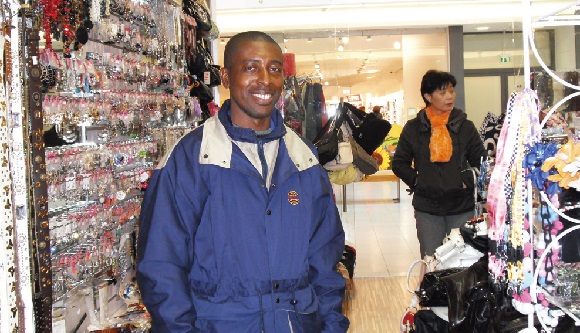 At a shop in Berlin

It is the fact that every bus tilted to the right on stopping at a bus stop to enable passengers to alight without difficulty (or having to jump) and also board without the least struggle.

When all passengers have boarded or alighted, the bus is then literally brought upright before it moves to the next stop.

Also noticed was that all the buses had been designed to accommodate the physically challenged or those using wheelchairs – there were slabs which were lifted onto the pavement by bus drivers to enable such people to climb the buses without sweat – talk about ingenuity.

Moreover, there were no bus conductors as we have on the metro buses in Ghana. The bus driver himself issues out tickets to passengers when they board the bus without one and gives them change by means of an automated machine on the bus.

Others like us had seasonal tickets – that is a ticket for the month of November, which we only needed to show to the bus driver when getting on the bus and would usually receive a nod.

There were no queues when boarding buses and one needed only to be at a designated bus stop at a convenient time and wait for a bus to arrive depending on the destination. There were normally also pasted in the bus the various stops of the bus, in addition to the fact that every stop was digitally shown on the bus before the bus arrived.

In addition, the stop was announced via an automated system and a passenger only needed to press the nearest stop button which also showed digitally on the dashboard to make the driver stop.

After spending a few days in Berlin, colleague coursemates all agreed that the transportation system in Berlin was very efficient.

No wonder it was confirmed by one of the seminar assistants as the best in Germany.

I could go on and on but time and space would not permit that. However, I would briefly touch on the train system as well, which was also very efficient.

There was the normal underground train which we used every day, both to and from the IIJ institute and the speed trains which connect people to other German towns and cities.

They operated on similar lines as the metro buses, save for the fact that they worked according to specific time schedules and the good thing was that one was always made aware of the arrival time of the next train to a particular destination, which often was 15 minutes.

The display also included the various stops along the way, as well as the particular train.

Indeed, we had to come off a train on our way to a programme because we missed the direction even though we were being led by a seminar assistant and she confessed that it was sometimes very confusing for even them.

So it happened that when a colleague and I took a train headed for our destination – HermannstraBe and realised that although we were at the right place we had lost our bearings as we had arrived at another side altogether, we believed it was no big deal.