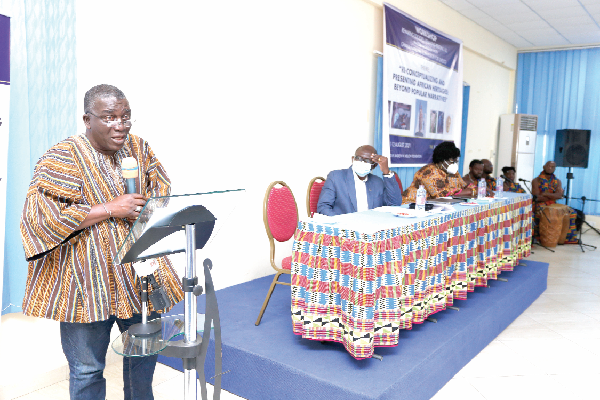 The Omanhen of the Essikado Traditional, Nana Kobina Nketsia V, has urged African governments to commence negotiations with their Western counterparts for the retrieval of all artefacts and cultural treasures that were looted from the continent during the colonial era.

The Omanhen indicated that the artefacts currently found in museums were the cultural heritage of the continent, adding that a retrieval of the artefacts would be of significant benefit to the region.

He further urged African governments to prepare a place to receive the artefacts ahead of the negotiation to facilitate their preservation and protection.

Nana Nketsia was speaking with journalists at a workshop to discuss measures to revive and preserve the country's cultural heritage and treasures in Accra on Wednesday, August 11.

It was under the auspices of the Department of Archaeology and Heritage Studies of the University of Ghana as part of the implementation of the Remaking Societies, Remaking Persons Project (RSRP).

“If you remove African artefacts from European museums, there will be nothing left. The things that we have done over time are what you find in there.

“The challenge for us is that since we want them back, we should also provide the receptacle to receive them and protect them in such a way that they are of benefit to us and nobody can take them away,” Nana Nketsia said.

Nana Nketsia’s remarks come on the back of the return of some 17,000 archaeological treasures dating back 4,000 years to Iraq by the United States – the largest return of antiquities to Iraq.

The move followed a meeting between Iraqi Prime Minister Mustafa al-Kadhimi and US President, Joe Biden in Washington, DC in July this year.

For many years, some African leaders as well as Pan-Africanists have been clamouring for the restitution of all looted artefacts, many of which were ‘stolen’ from the continent during the colonial era.

Addressing the Fourth Ordinary Session of the Fifth Parliament of the Pan-African Parliament in Johannesburg, South Africa, in May this year, President Nana Addo Dankwa Akufo-Addo emphasised the need for Africa to intensify efforts to retrieve all looted artefacts and cultural treasures housed in museums in countries that stole them from the continent.

“Whatever the obstacles, we must get them back,” the President said, explaining that those countries were making money from the treasures at the expense of Africa.

Describing colonialism as a matter of consciousness, Nana Nketsia said there was the urgent need to reposition Africa to “rethink its heritage” through the utilisation of its resources and the adoption of its own philosophy.

“The African mind must be unshackled. But to unshackle your mind, you need courage. It is however important to note that only Africans can unshackle the African mind,” he stressed.

Addressing the gathering, the Principal Investigator for the RSRP, Professor Kodzo Gavua, said the project would provide a forum for “rethinking heritage, museums and memory work.”

“We would like to study and understand public history; history we can find in the streets, the history of the experiences of the voiceless. Research conducted will culminate in scholarly outputs, exhibition development and community outreach as instances of public scholarship,” he said.

For her part, the Executive Director for the National Commission on Culture, Ms Janet Edna Nyame, urged educational institutions to express interest in cultural issues and design a curriculum that would reshape the mindset of Africans to appreciate and preserve their culture.