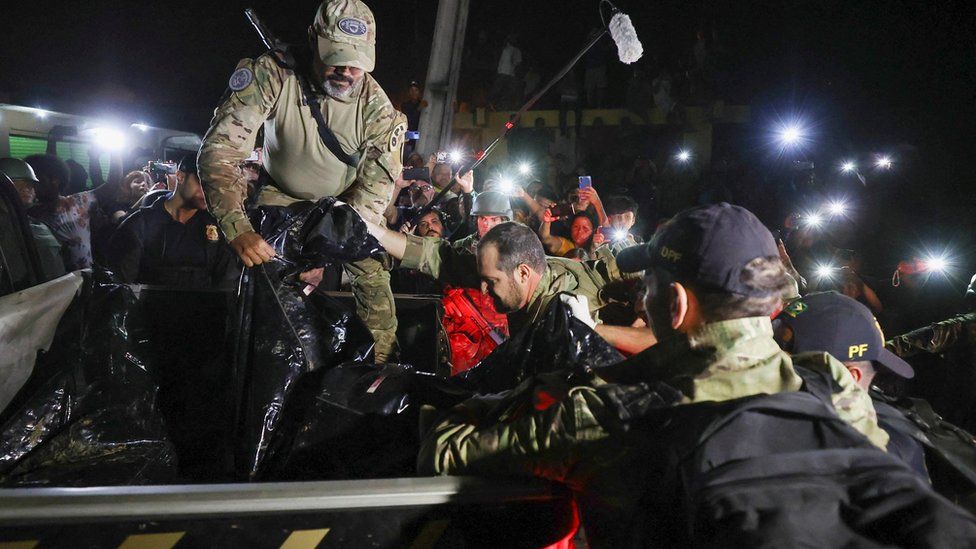 Federal police officers carried bags containing human remains after one of the suspects, Amarildo, pointed out the location of the corpses to local authorities
30.5k Shares

He said police would work with Interpol to confirm the bodies' identities.

Mr Phillips, 57, and Mr Pereira, 41, disappeared in a remote part of the Amazon rainforest on 5 June.

Two suspects, brothers Amarildo and Oseney da Costa de Oliveira, have been arrested in connection with the case.

Detective Fontes told journalists the "first suspect" - Amarildo - had "recounted in detail the crime that was committed and indicated the place where he buried the bodies". His brother denies any involvement.

Police said they expect to carry out further arrests, and the motive for the killings is under investigation.

Mr Phillips' wife, Alessandra Sampaio, said in a statement: "Although we are still awaiting definitive confirmations, this tragic outcome puts an end to the anguish of not knowing Dom and Bruno's whereabouts. Now we can bring them home and say goodbye with love.

"Today, we also begin our quest for justice. I hope that the investigations exhaust all possibilities and bring definitive answers on all relevant details as soon as possible."

She expressed her thanks to everyone involved in the search for her husband and Mr Pereira, "especially the indigenous peoples and Univaja".

Univaja, the region's indigenous association, was the first to alert authorities when the pair went missing.

The group expressed its "deep sadness" following the news conference.

It said of the men's deaths: "Univaja understands their murder is a political crime, they were both human rights defenders and died doing work to look after us indigenous people from Vale do Javari."

Briton Mr Phillips had been living in Brazil for more than a decade and was a long-time contributor to the Guardian newspaper. He was working on a book about the Amazon.

Mr Pereira, a Brazilian who was on leave from his post with the government's indigenous affairs agency Funai, was an expert on isolated tribes.

Some of their belongings, including clothes and a laptop, were found on Sunday.