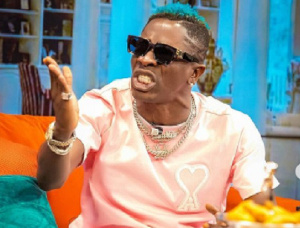 With the expression of outrage by some Ghanaians over US rapper, Meek Mill’s controversial shoot at Jubilee House, Dancehall artiste, Charles Nii Armah Mensah thinks otherwise.

Probably outraged by the negative response from some Ghanaians about the video, the Kakai hitmaker is describing critics of the video as "villagers".

In a tweet earlier Monday, January 9, he said, “You wan go America go take pictures for White House. You say “year of return” and your own black brother come shoot video as he return home you bore. You are a villager trust me!!!”

Shatta Wale may probably be the only popular figure who has publicly come out to defend the video which appears to have irritated a number of Ghanaians since the American Rapper dropped a teaser on his Twitter page yesterday, January 8.

The content of the video, which shows some parts of the Jubilee House including the podium of President Akufo-Addo has since generated conversations on social media with many Ghanaians condemning it including former government officials and some Members of Parliament (MPs) condemning the act.

You say “year of return “ and your own black brother come shoot video as he return home you bore ..

You are a villager trust me !!!

The Member of Parliament for North Tongu , Samuel Okudzeto Ablakwa has called for the dismissal of persons responsible for what he described as “despicable desecration of the Jubilee House.”

“All those responsible for this despicable desecration of the Jubilee House by Meek Mill must be fired immediately. How do those explicit lyrics from the president’s lectern project Ghana positively?

Is Ghana’s seat of government no longer a high-security installation?” Mr. Ablakwa tweeted.

Rapper Meek Mill visited Ghana during Christmas and the New Year and performed at the Afro Nation concert as the headline artiste.

The rapper had earlier courted controversy when photos of his hand on the shoulders of President Nana Akufo Addo emerged during a visit to the Jubilee House recently.

That is not all, he became the subject of interest in Ghana’s social media space when he tweeted about his phone being stolen prior to his performance at Afro Nation on Thursday, December 29.

Since then, the rapper who wowed music enthusiasts with songs such as All Eyes on You, Going Bad, Dreams and Nightmares, R.I.C.O and Ima Boss has been generating lots of buzz on social media with his activities in Ghana

Please don't underrate @MeekMill His fight to reform the criminal justice system in 🇺🇸 has made him an icon with access to many places there & beyond. Please listen to his songs: Stay Woke, Respect the Game, Oodles and Noodles, Cold Hearted feat Diddy, Flamerz Flow, (Thread) https://t.co/pjARWfLmwj