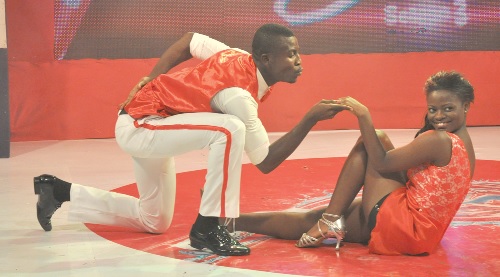 The countdown to the Close Up Salsa Fiesta season three has begun and the competition is getting tougher and tougher as was seen last Sunday on TV with the top ten dance moves of the six couples for this year’s final.

In ascending order, the tenth place was taken by  Tina and Kalala, ninth place went to Megan and Luumva, eighth Ketura and Francis, seventh Henry and Joyce, sixth Pascaline and Noah, fifth Juliana and Dickson and fourth Megan and Luumva.

The top three spots were the most keenly contested. The third place went to Ketura and Francis, second place Pascaline and Noah and the ultimate number one place went to Megan and Luumva.

The top ten dance moves was based on dances which scored highest points on the judges’ score sheets and was chosen from different dance tasks.

Do the top ten dance moves  reflect what will happen at the grand final?


As all six couples  fervently prepare for the final, their eyes will be on the prizes. The top three couples will walk away with GHC11, 000 while the winners of the learners competition get  GHC 7,000

Viewers can catch the series this and every Sunday on GH-ONE at 6:00pm and Metro TV at 7:30pm.