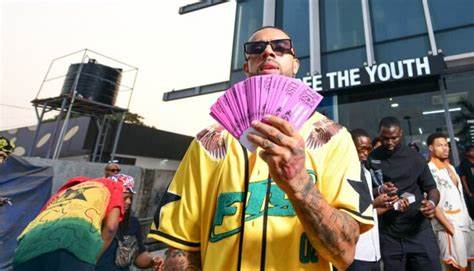 Rapper Vic Mensa had an emotional moment on stage when he talked about the purpose of the event
30.5k Shares

The maiden edition of the 'Black Star Line Festival' came off at the  Independence Square in Accra yesterday, January 6 with a host of prominent music icons thrilling revelers who made their way to the venue.

As earlier disclosed by the event organisers, American musicians Chance the Rapper and Vic Mensa, who were the headline artistes put together the concert with the aim of reconnecting and strengthening the unity between Africans living in the Diaspora and those on the continent.

The concert was named  after the historic 'Black Star Line' sea travel initiative by the legendary Marcus Garvey.

The show had both local and foreign artistes on stage to celebrate African unity.

There were many solidarity messages from guest musicians, celebrities and an emotional moment of gratitude to the Ghanaian people from the organisers.

Co-founder of the 'Black Star Line Festival' rapper Vic Mensa had an emotional moment on stage when he talked about the purpose of the event.

"I had this dream not so long ago about connecting people from Ghana to the world. Just a year ago, we sat at Laboma beach and we dreamt of this moment.

"And, to see it come to life with my people from all around the globe unified. This whole thing has been emotional for me because, just one year ago, I was locked up in a cell in America and I could smell the waters all the way from Labadi beach", he explained.

Chance The Rapper, who is also a founder of the 'Black Star Line Festival', expressed his joy at the success of the event and gratitude to the Ghanaian crowd that came out to witness the show; as quite a number of fans were still around to watch the last performance which came off around 5:30am.

"My heart is so full right now, that there are people that are still waiting for me to perform. I appreciate what I saw here, I appreciate the peacefulness, the welcome experience, I appreciate everybody that worked all day and night setting up this festival for us . We did this together.

"This is us working in unison. We can create our own space together where we can feel free to be loved and supported, feel safe, be free and be ourselves, and define our own identities. And, I thank Ghana for being so accommodating and making us feel at home", he said.

Many of the musicians and celebrities pledged their support to the initiative. American musician 'T - Pain' said, "When I see these many black faces, this thing makes me feel good and I appreciate you all. I touched down yesterday, and it was just a good feeling in my heart.

"And, I want to say, Chance, I am really proud of you bro. This is literally the 'blackest' thing that has ever happened and it feels nice to be a part of this. I just want to take a break to say that I am honoured and thank you to anybody that had anything to do with putting this together", he said.

American renowned Soulful singer Eryka Badu, also had some nice words for Ghanaians during her performance. "I appreciate you all welcoming us. This is our therapy. This is my therapy", she said.

Also at the event grounds were renowned American comedian,  Dave Chappelle (U.S.A), American singer, Sway of 'Sway in the Morning' and Michael Blackson who  applauded the efforts of the organisers and the Ghanaian hospitality.

The show closed in the early hours of Saturday morning with fans still in a good mood despite standing for very long hours.