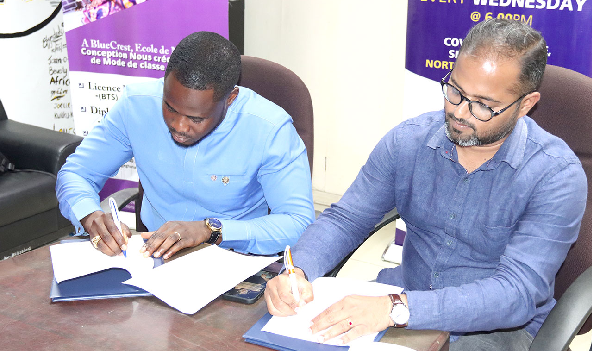 The Rotary Club of Accra Industrial Area has signed a memorandum of understanding (MoU) with BlueCrest University College to enhance collaborations between the two entities.

Under the agreement, Rotaract Club (an arm of Rotary) will be established in the school to enable students to provide service for the community and network with professionals from various industries.

The agreement further seeks to provide scholarship opportunities for women who are interested in pursuing information technology (IT) and also make education affordable and accessible to all.

In a brief meeting last Thursday, the President of the Club, Dean Selorm Senchim, professed his elation with the agreement, citing the benefits of leadership skills that students would gain from the Rotaract Club.

“We are looking at making the BlueCrest Rotaract happen and engaging so that rotarians who have interest in some of the courses that you are offering will come in to learn,” he added.

Education, Mr Senchim stated, was one of the areas of service of the Rotary Club, adding that the partnership would help make tertiary education more affordable and accessible to the youth.

The Rector of BlueCrest University College, Dr Syith Jayaprakash, also expressed his gratitude for the partnership, saying that it would go a long way to bridge the education gap in the society.

Blue Crest, he said, in its 10 years of existence, had trained over 5,000 students in IT and Fashion.

He explained that the school majored in those courses because they held the potential of equipping students with entrepreneurial skills.

He stated that he looked forward to collaborating with the Rotary Club to diversify the educational space and bring more women into IT.

The Rector also offered the club one slot for the Women in IT scholarship programme, where the club would bring one lady to undertake a four-year degree programme in IT at the college.

He expressed the hope that the partnership would connect students to industry professionals for internships as well as after-school employment.