Heartbeat actor Bill Maynard has died at the age of 89 after a career spanning eight decades.

Daughter-in-law Jacqueline Reddin said he died in hospital in Leicestershire, shortly after breaking his hip in a fall from a mobility scooter.

"He was larger than life and he just loved showbiz," she said. "He was so proud of the fact that he had been working for 81 years."

He was perhaps best known as Claude Jeremiah Greengrass in Heartbeat.

Maynard - whose real name was Walter Williams - starred as the scruffy, eccentric poacher in the police drama for eight years, from 1992 to 2000, and was in its spin-off The Royal until 2003.

Other roles included Oh No, It's Selwyn Froggitt!, The Gaffer and In Sickness and In Health. He also made appearances in Carry On films Carry On At Your Convenience, Carry On Matron and Carry On Dick, and was Sergeant Beetroot in TV series Worzel Gummidge in 1980.

Maynard's most recent role was a brief appearance in 2017 drama The Moorside, about the disappearance of Shannon Matthews.

Maynard, back right, appeared in In Sickness and In Health

Outside of acting, Maynard tried his hand at singing - coming second in the British heat of the 1957 Eurovision Song Contest - and politics, standing as an independent against Tony Benn in the 1984 Chesterfield by-election.

He also celebrated 60 years since his first TV appearance in 2013 by releasing a version of What a Wonderful World.

Maynard's daughter-in-law said he had recently filmed an episode of BBC One quiz show Pointless, which was yet to air.

Bill Maynard in 1970, preparing for a role as Charles Dickens

Tributes have been paid to Maynard, with actor Ian Champion saying he "had the blessing" to work with the "colourful, warm and mischievous" actor on Heartbeat. 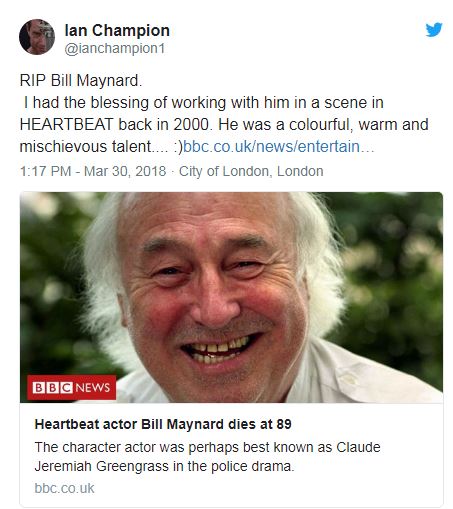 Photographer Mike Sewell, who had met Maynard at his home in Burbarge, said he was a "friendly and funny gentleman".