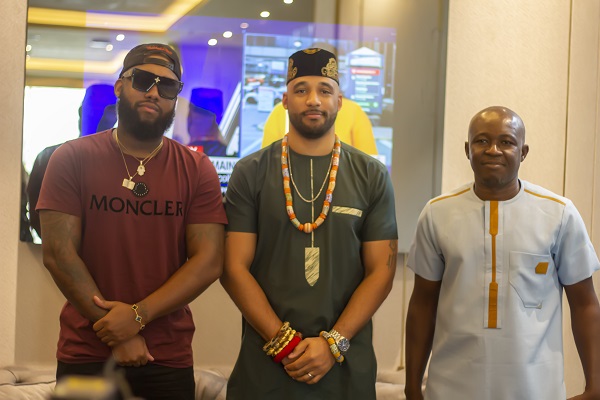 His Eminence Nana Dakrabo I, Mpuntuhen of Akonoma in the Central Region has expressed his passion to work with the relevant state authorities to make an impact in Ghana’s entertainment industry.

Nana Dakrabo 1 in an interview with the media emphasized that the Dakrabo l World Film Studios project had made a remarkable stride in the acquisition of a 321-acre land earmarked for the construction of the project and is set to launch its first phase; a recording studio in Accra.

The ultramodern recording studio marks a major milestone of the Dakrabo I World Studios as it would offer talented music acts the opportunity to record good and quality types of music.

“The Dakrabo l world studios has made a lot of progress towards acquiring the lands. We are working with Chauncey to launch the first face of the project which is the recording studio in Accra as the first step towards building the entertainment industry in Ghana” he said.

“We have also studied the Ghanaian film industry and what we want to do is to bring some of the big names in Hollywood to Ghana and the equipment to teach the filmmakers how we do it with the structures of production to build a robust film industry,” Chauncey Gardner told the media, adding that the education and opportunity that will be created will develop some filmmakers in the industry.

The project is expected to commence this year at Asebu, Cape Coast in the Central Region.

Nana Dakrabo I as part of an effort to seek the endorsement of the government last year met with the Deputy Minister of Tourism, Arts and Culture, Mark Okraku-Mantey who commended the delegation for the project to support the country's entertainment industry.

Mr. Okraku-Mantey also assured the delegation of the ministry's support in the construction of the Dakrabo 1 World Studios and urged other diasporans to come home to help contribute to the growth of the country with fresh skills and capital.