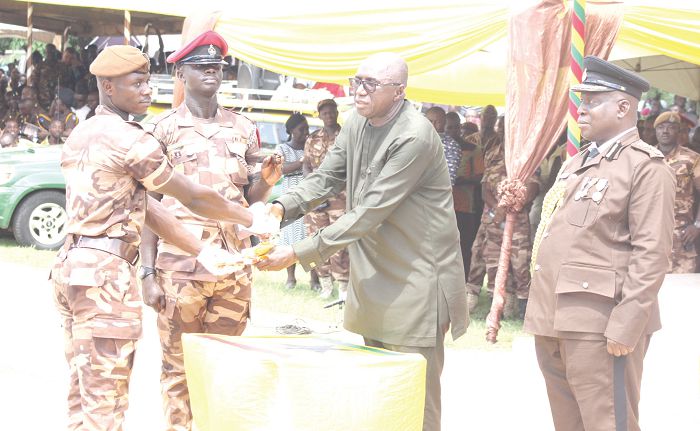 The Minister of the Interior, Mr Ambrose Dery, has reiterated the government’s commitment to reduce overcrowding in the country’s prisons.

Although the authorised capacity of the entire prisons is 9,945, a total of 14,799 prisoners are being held throughout all the prisons.

Mr Dery conceded that the huge numbers coupled with the lack of adequate logistics presented a challenge to effectively manage the prisons in line with international best practices.

In view of that, he said, the government would support the “Justice For All Programme” and the establishment of prisons camp farms as another effective tool to decongest the prisons.

He said three In-Prisons courts had been established at Nsawam, Kumasi and the Tamale prisons to help speed up both remand and appeal cases.

Addressing a passing-out parade of Recruits Course 111 at the Prisons Officers Training School in Accra yesterday, Mr Dery said the government was committed to ensuring continuous improvement of the situation of prison officers and inmates.

At the ceremony, 436 personnel, made up of 272 males and 164 females who went through an eight-month course, from September, 2018, under a three-phase model, were inducted into the service as Second Class Officers.

The initiative, the Interior Minister said, would help the Prisons Service take advantage of the “Planting for Food and Jobs” programme, as well as serve the dual purpose of training inmates in modern practices of agricultural production and also help generate income to supplement the government’s subvention to the service.

Mr Dery charged the officers to exhibit a high sense of professionalism in the discharge of their duties with their new promotion as Second Class Officers.

Present at the ceremony were the heads of security agencies, including the Director-General of the Ghana Prisons Service, Mr Patrick Darko Missah, and the Deputy Director of Prisons, Mr Samuel Adjei-Attah.