Regional ministers must stand and be counted 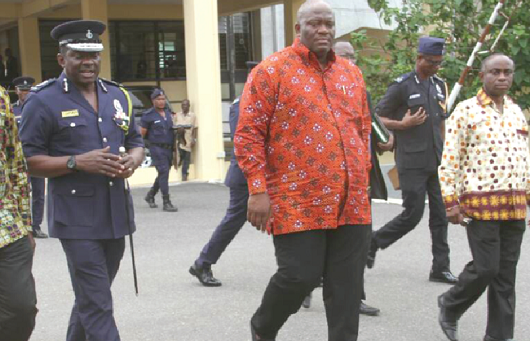 Article 256 of the Constitution tasks regional ministers, as representatives of the President in the regions, to be responsible for the coordination and direction of government machinery in the regions.

They must thus build strong team spirit with especially their RCDs and ensure the availability of resources for the RCCs to perform their roles effectively to move the development of the regions.

As chairmen of the RCCs, regional ministers must be on top of issues to proactively and decisively deal with any threat to peace and stability that has the propensity to retard development in the regions and create a sense of insecurity among the populace.

It must, therefore, be drummed home to them that without their hard work and resourcefulness, all government plans and programmes will come to nought.

This must tell them about the important role they occupy in national development, for which reason they must approach their work with seriousness, dedication, commitment and loyalty to support the President in his efforts to bring development to every part of the country.

Be that as it may, the Constitution enjoins the President to “. . . appoint such number of ministers of state as may be necessary for the efficient running of the state”.

The ministers must, therefore, brace themselves for the task ahead. We note that the acceptance of the responsibility implies that they have assessed themselves thoroughly and arrived at the conclusion that they are capable of the assignment ahead.

For the important role that regional ministers play in the nation’s development, the Daily Graphic sees the charge to the Upper East Regional Minister by the Paramount Chief of the Chiana Traditional Area and President of the Upper East Regional House of Chiefs to work assiduously to attract investors to the region as very instructive.

They must effectively liaise with the local authorities to identify and develop new areas to create more employment to enhance the living conditions of the people. The days when a regional minister was a ceremonial minister, only visiting communities and enjoying the pecks of office, must give way to an era when a regional minister is a true initiator and implementer and the fulcrum around whom development revolves.

Many a time, regional ministers escape blame when the challenges of their respective regions come up for discussion. Most of the time, it is Members of Parliament and metropolitan, municipal and district chief executives who bear the brunt of the people’s anger and condemnation and are ultimately held responsible.

We must begin to hold regional ministers to account, given the fact that they have a bigger mandate, command more state resources and have the clout to ensure that the developmental needs of the regions are met. They must use their influence and clout to get investments into their regions in order to generate employment opportunities for the unemployed youth.

For far too long, many of our regional ministers have not used their positions fully to execute the development agenda of the regions and that of the state.

And in terms of bringing investments to their regions, the Daily Graphic holds the strong view that not many regional ministers can stand and be counted.