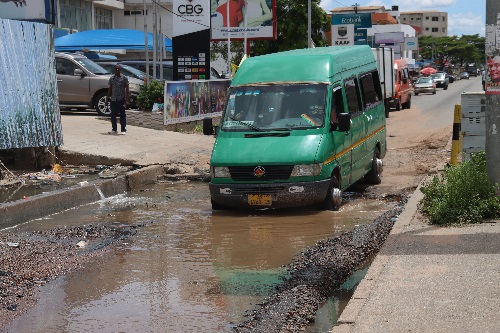 Roads provide tremendous value in ways we often do not even think about. Indeed, modern-day societies are reliant on a well-functioning and maintained road network.

Not only do roads enable us to move goods and people, ensure emergency services such as ambulances, fire service and police can reach us in times of need, but they also allow modern-day conveniences.

The truth of the matter is that none of these will function effectively without well-maintained roads. Despite our reliance on roads and the immense value they provide, roads are very much a neglected part of our infrastructure when it comes to maintenance and construction.

In yesterday’s edition of our publication, we carried a front page lead story on how the recent rains had battered Accra roads and in its wake exposed the poor state of many roads in parts of the Accra and Tema metropolises.

In the story, we reported of a number of tarred roads that had had their surfaces washed away, while others had developed potholes and gullies. Untarred roads had also not been spared, as they were in a terrible state.

Happily, responding to the issue, the Minister of Roads and Highways, Kwasi Amoako-Attah, said the Mobile Maintenance Unit (MMU) of the ministry had been deployed to rehabilitate all roads in the country that had been affected by the recent rains.

He said the MMU, which had been responsible for maintenance works on the country’s roads and highways, would continue its maintenance to keep all roads motorable.

Many of the good and safe roads in the metropolises have sadly been turned into bad roads because of poor construction or due to natural calamities such as floods, and landslides.

And this is why we at the Daily Graphic found it expedient to highlight the otherwise national problem in order for the Roads Ministry to fi x those roads in some of the affected areas, particularly in Accra and Tema, which have been denied good roads.

Talking about deprived areas, as if by design or accident, the western part of Accra, especially Ga South and its neighbouring municipalities, have been denied this very important national priority. Areas such as Bortianor, Oshiyie, Kokrobite, Ablekuma, Aplaku, Ayaa, among others, are virtually no-go areas during rainy periods because they lack motorable roads and sooner than later stand the risk of being completely cut off.

We are generally concerned about the state of our road network, particularly, in the western enclave of Accra because residents who are also citizens of Ghana who discharge their civic responsibilities such as the payment of taxes are completely left out when it comes to the provision of roads by the state.

The social impact of transportation in our communities is under-considered. For example, when a community lacks transport infrastructure such as roads, it leads to a deterioration in the quality of life of the people in the community.

We are happy to note that recently Mr Amoako-Attah led a high-powered delegation including Members of Parliament and the Metropolitan Chief Executives to visit the western enclave of Accra and described what he saw as needing priority attention. This came to many residents of those communities as a great relief and then came the rains, which had battered several roads there, making them impassable.

Thankfully, Mr Amoako-Attah has promised that the Mobile Maintenance Unit has been deployed to ensure that all the bad roads are quickly fixed. We do hope that the unit will immediately begin to work on the affected roads and also ensure that their works will survive the imminent rains and floods.

However, beyond that, we are encouraging and reminding the government of its Year of Roads promise and its pledge to construct more roads across the country.

This is key to ensure the total accelerated development of the country and it is a goal we cannot lose focus of.