Deployment of aircraft in fight against galamsey, good initiative 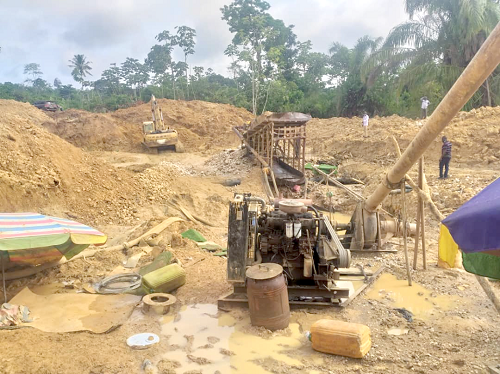 The Ministry of Lands and Natural Resources has revealed that it is set to take delivery of four aircraft from the Ghana Armed Forces to aid the fight against illegal mining, also known as galamsey.

According to the Deputy Lands Minister, George Mireku Duker, the aircraft belonging to the Armed Forces would be useful as a new strategy to combat galamsey.

In November last year, some personnel of the Ghana Armed Forces who were deployed to combat illegal mining in forest reserves and river bodies seized 30 excavators, destroyed four and immobilised four others on the spot.

This occurred after the relaunch of Operation Halt II on October 11, 2022, with the seizure and destruction occurring between October 11 and October 31.

For us, the fight against illegal mining appears to be elusive, notwithstanding the modest gains achieved. The fight against galamsey is an important one that requires the marshalling of all resources and logistics to nip this canker in the bud.

For us at the Daily Graphic, the most feasible way to curb the canker is concerted effort and total support by key actors, such as politicians, traditional rulers, civil society organisations (CSOs), the media and residents of mining communities.

We, therefore, support the call by the minister that all stakeholders must come on board to help protect our land and water resources from destruction.

It is regrettable that after pumping millions of Ghana cedis into various interventions aimed at weeding out galamsey, the fight appears to be far from over.

This is particularly worrying because as the illegality surges on, the destruction of land, forest and water resources deepens.

The Daily Graphic believes that when this unflinching determination by the government is anchored on total support from the other stakeholders, the tide could be stemmed.

Unalloyed support from all stakeholders, including traditional authorities, the security agencies, politicians, the media and CSOs will be key in how far we go with this fight.

We agree with the minister that the destruction caused by illegal mining activities has dire implications for sustainable national development and needs an all-hands-on-deck approach to curb.

The fact that the fight against galamsey requires systematic, sustained efforts and action over a period of time cannot be overemphasised.

Every well-meaning citizen must see the fight as a duty call to save the country from the hands of nation wreckers who are motivated by greed to destroy our future for their personal gain.

Chiefs, who are the custodians of the land, must rise and be counted; the security agencies must demonstrate their love for the country by going all out to weed out perpetrators of galamsey, while stakeholders at the local level, including assembly members, district chief executives and opinion leaders, particularly those in mining communities, must play their part to safeguard our land and water resources.

We see the fight against illegal mining as a call to national duty because it affects the very soul of our country. The pollution of rivers such as the Ankobra, Bia, Birim, Offin and Pra affects every Ghanaian in one way or the other.

The continued pollution of these water bodies is a serious threat to water security for citizens, as it is predicted that the country risks importing water if a concerted effort is not made to stop galamsey activities in rivers.

More to the point, billions of Ghana cedis is required to reclaim mined lands and pits left behind by illegal miners. The least said about the devastating impact of illegal mining on agricultural land and the cocoa industry, the better.

We cannot look on unconcerned for nation wreckers to destroy our heritage for their selfish interests.

We have to act now to save our land and water resources, otherwise posterity will not forgive us.