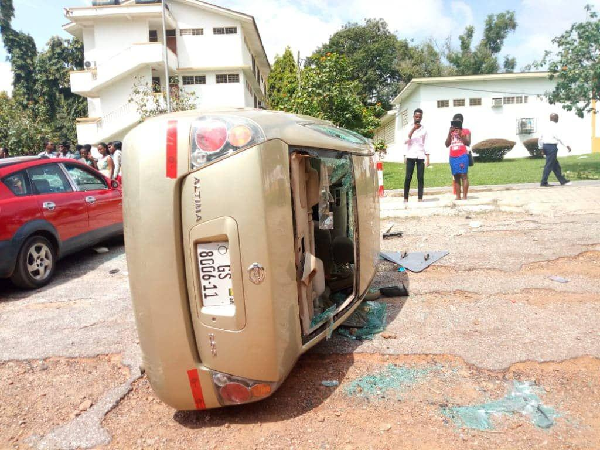 For instance, students of the Commonwealth Hall, known as Vandals, and those of the Mensah Sarbah Hall, both of the University of Ghana, have had a long-standing rivalry as to which of the two halls is mightier on the Legon campus, and could engage in long hours of singing ‘jama’ songs without stopping, all as a way of displaying their resilience and superiority.

Indeed, in times past, the rivalries were healthy ones and students of the rival halls respected each other as equal human beings seeking higher knowledge, all for the advancement of Mother Ghana.

It was even fun for a student to be ‘ponded’, which means being thrown into stagnant water by his peers, either because of an offence committed or something else.

Unfortunately, over the years, such healthy rivalry has degenerated into nasty, bloody and simple vandalism that should not be countenanced by the authorities.

It is a fact that those students who lead in such vandalism at the secondary level are the same ones who carry such attitudes to the tertiary level.

Last week, students of the Bawku and the Bolga Technical institutes went on the rampage, vandalising their school property, in addition to a police vehicle.

These actions must not be tolerated and we are happy that the Upper East Regional Security Council directed final-year students of the schools to stay at home and go to the school compounds to write their papers on a daily basis.

The various acts of vandalism occurring on our university campuses are unacceptable, knowing that these campuses are citadels of knowledge where people are moulded and shaped to take up leadership positions at all levels.

The Daily Graphic believes that these shameful developments should be nipped in the bud before such students graduate to become threats to national security.

Last Saturday, a vehicle parked at the Mensah Sarbah Hall of the University of Ghana was set ablaze during a clash between students of the hall and those of the Commonwealth Hall.

Notice boards, waste containers, Veronica buckets and some vehicles were also destroyed during the clash and the bust of John Mensah Sarbah in front of the hall was removed.

In 2020, some students affiliated to the Oguaa and the Atlantic halls of the UCC clashed, leading to the destruction of property belonging to both halls, resulting in three students, who were caught up in the milieu, sustaining some injuries.

Similar stories abound in the KNUST between the University and the Unity halls, and last year a number of students suffered varying degrees of injury after one such clash.

The Daily Graphic believes the time has come for the management of the universities to bring sanity to their campuses to ensure that they do not end up breeding thugs and indisciplined graduates who will end up becoming liabilities to society.

We are looking forward to the time when such inter-hall rivalry will become healthy, promote good neighbourliness and bring about positive outcomes that will inure to the collective good of students, the university communities and the nation by extension.

No doubt, the university environment will become very boring if the only focus is on academic endeavours. Therefore, engaging in some fun activities helps in recreation and bonding, but when such activities become destructive and sheer vandalism, then they cease to be fun.

After all, it is said that when a handshake travels beyond one’s elbow, it ceases to be a handshake but a call to fight.

We call on the management of the various universities, with the support of the alumni associations, to help bring sanity to our campuses and set good standards for future students.

Our universities cannot afford to breed miscreants and indisciplined graduates who will fail the nation and posterity when the baton of leadership is handed over to them.