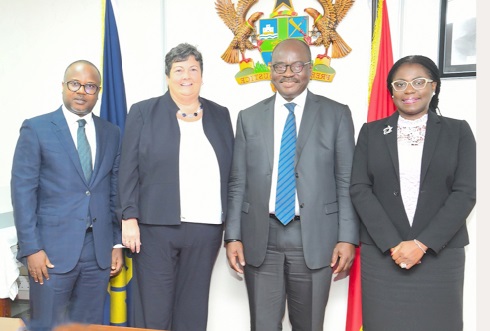 The United States (US) Ambassador to Ghana, Virginia Palmer, has paid a courtesy call on the Governor of the Bank of Ghana, Dr Ernest Addison, and the management of the central bank.

In a welcoming address, Dr Addison provided an overview of Ghana’s current economic situation and noted that inflation had risen to over 40 per cent, while the cedi had depreciated by over 53 per cent on a year-to-date basis.

He, however, assured the ambassador that the raft of measures introduced by the central bank and the impending International Monetary Fund (IMF) programme would help to restore macroeconomic stability in the medium term.

The Governor expressed optimism that the 2023 Budget had taken the initial step to reset fiscal policy on a consolidation path, and its smooth implementation would ease debt sustainability concerns.

For her part, the US Ambassador to Ghana expressed her gratitude to the Governor and the management of the bank. She commended the Dr Addison-led management for the key role they have played in ensuring that the banking sector remained sound and safe, in spite of the economic challenges.

The Ambassador was accompanied by the Economic Section Chief of the US Embassy, Stephanie Hutchison.