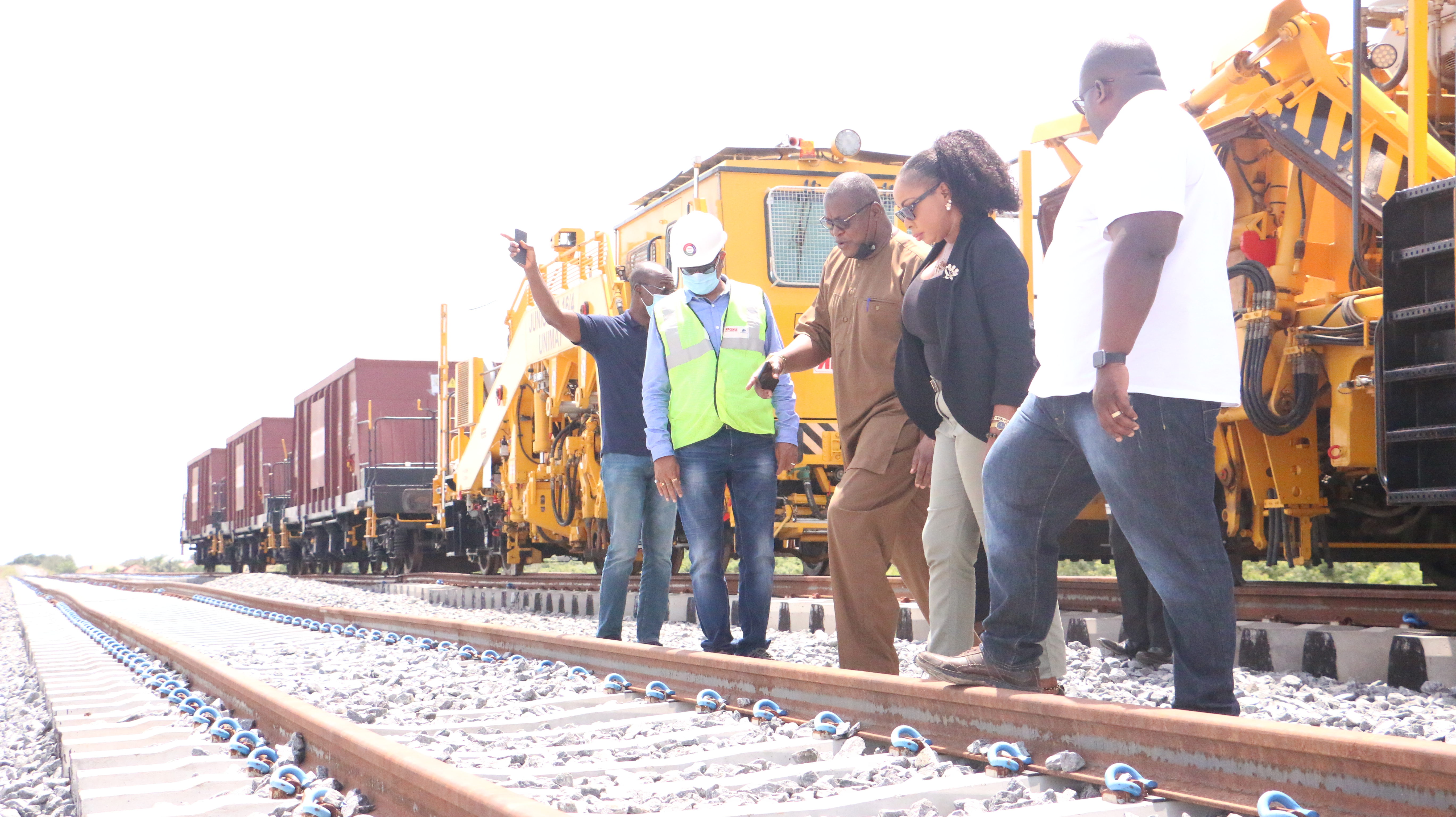 The PIC members inspecting progress of work on a section of the railway.
30.5k Shares

The Head of Freight and Logistics at the Ghana Shippers’ Authority (GSA), Mr Fred Asiedu-Dartey, has said the completion of the Tema-Akosombo railway project will boost transit trade.

He said, the project, which was a component of the 1,000 kilometres Ghana-Burkina railway interconnectivity project, will fast-track key requirements of the Memorandum of Understanding (MoU) signed between the GSA and the shippers’ councils of Mali, Burkina Faso and Niger to facilitate inter-country trade.

Mr Asiedu-Dartey made this known during a tour to monitor the state of progress of the railway project on October 14, 2020 by members of the Port Infrastructure Committee (PIC) of the Governing Board of the GSA, explained that the project will also relatively reduce the cost of transportation of goods and serve the interest of transit shippers and shippers in the northern part of the country.

The project falls in line with the GSA’s vision of ensuring a quick, safe and reliable delivery of import and export cargo by all modes of transport at an optimum cost for shippers in Ghana.

The 97 kilometres railway stretches from Tema to Mpakadan and is being funded by the Indian EXIMBANK at a cost of US$447 million. The project, which comes with the construction of six passenger stations and a freight terminal in the Tema Port, is part of the national railway plan to construct over 4,500 kilometres of railways across the country.

The Director of Tema Port, Mrs Sandra Opoku, who is also a Member of the Board of GSA, said the construction of the Tema-Akosombo railway will significantly reduce the movement of cargo by road, particularly to the northern part of the country.

With the Tema Port alone handling 17 million tonnes of cargo in 2019 which was transported by road to various destinations, the completion of the railway project will be a game changer.

The construction, she said, will reduce pressure on the roads and address other axle load related challenges associated with the transportation of goods to the landlocked countries.

The Head of Legal and Contract Management of AFCONS Infrastructure Limited, Mr Asim Kumar Gupta, noted that 75 kilometres of the railway has been completed but final completion was scheduled for July 2021.

The Deputy Chief Executive of the Ghana Railway Company Limited (GRCL) and member of the PIC, Dr Michael Adjei-Anyetei, said plans were far advanced for Ghana to take over the management of the project after its completion.

He said parliament has given approval of US$230 million for the purchase of rolling stock.

"Rolling stock are vehicles that move on a railway, including both powered and unpowered vehicles, such as locomotives, railroad cars, coaches and wagons."

The tour by the PIC members took them to the office and factory of AFCONS Infrastructure Limited, site for the construction of a 300-metre bridge across the Volta River, final site of the railway project at Mpakadan and other places.