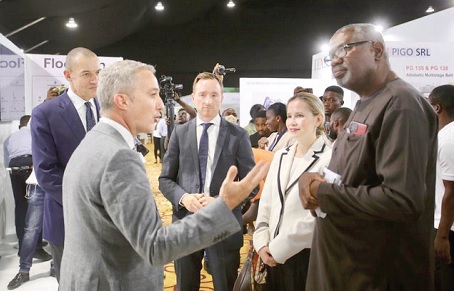 Bilateral Trade between Ghana and Italy reached a record high of €520 million in 2021.

This figure is set to be exceeded this year as bilateral trade between the two countries was already approaching €600 million as of August 2022.

At the West Africa Agrofood and Plastprintpack exhibition in Accra, the Ambassador of Italy to Ghana and Togo, Daniela d’Orlandi, said the most important part of Italy’s exports to Ghana were the capital goods, stating that over €16 million of machinery and equipment was traded in 2021.

She said that was a reflection that a lot of companies in Ghana have chosen Italy as a technology partner.

“Still our ambition is to re-enforce bilateral cooperation with the Ghanaian market even more as our Italian Trade office in Accra, with the support of the embassy, has put in place several activities to create opportunities for Italian and Ghanaian companies to connect and start new projects together,” she stated.

Commenting on the exhibition, the ambassador pointed out that Italy brought a large and qualified delegation of 20 manufacturers of machinery and products for the plastics, printing, packaging and the agribusiness industry.

“We are sure our presence in Accra will allow Ghanaian companies to learn more about the possibilities Italy can offer to upgrade local production and to help them to better respond to the increasingly sophisticated domestic demand and on the other hand transform markets with more value added products.”

“Italian machinery in the plastic, printing and packaging and agrifood sectors are widely appreciated worldwide and have earned that reputation through consistent efforts to support their clients,” she stated.

She said as Ghana’s economy grows, so does its needs for technology and quality products, something Italy through its manufacturing industry could be partner.

The 7th International Trade Show & Conference on Agriculture, Food & Beverage Technology on West Africa Agrofood and Plastprintpack is being organised by Fairtrade Messe in collaboration with its local partners, Geovision.

It is aimed at helping countries in the West African Sub-region to increase self-sufficiency and also improve supply in the agricultural value chain.

Six countries are mounting pavilions at this year’s exhibition.

These are Germany, Italy, Iran, The Netherlands, South Africa and Sri Lanka.

In total, over 90 exhibitors from 20 countries will showcase products, technologies and solutions specifically tailored for the West African market.

He said this was against the backdrop that West Africa imports of agricultural machinery had reached around €200 million annually.

For his part, the Director, Plants Protection Services at the Ministry of Food and Agriculture (MoFA), Eric Bentsil Quaye, said agriculture was the mainstay of Ghana’s economy and continued to contribute heavily to its Gross Domestic Product (GDP).

He said the sector also created employment and generated income through export.

He attributed the problems confronting farmers in West Africa in particular to global activities such as the Covid, the ongoing Russia-Ukraine war and Climate Change.

These negative developments, Mr Bentsil Quaye said, have brought about food security challenges in the region.