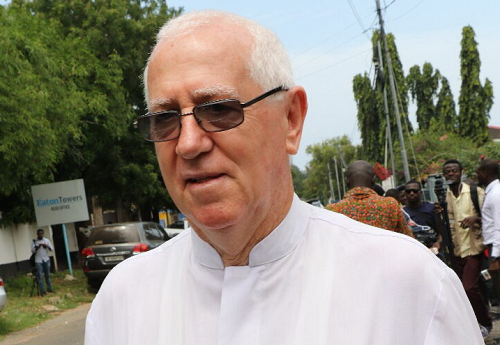 Rev. Father Andrew Campbell is an Irish-Ghanaian catholic missionary, founder of the Lepers Aid Committee and parish priest of Christ the King Catholic church in Accra.

Known as the ‘Father of the lepers’, Father Campbell was ordained as a Catholic Priest in December 1970, after which he was posted to Ghana as a missionary priest under the Society of the Divine Word(SVD) a year after.

He served in many Catholic parishes in Accra, including the Holy Spirit Cathedral, Adabraka, the St Peter's Parish, Osu and the Sacred Heart Parish Accra, where he established the Sacred Heart Vocational Institute.

Taking his turn on the ‘Engine Room’ series on the Springboard, Your Virtual University, he said his life had always been to live for other people.

He said he came from a beautiful family where his parents always taught him to give and make people happy.

He said his dream to become a priest started when he was in the primary school.

“We went to a Catholic primary school and we use to read magazines from various religious congregations and use to meet priests who have been out to the missions and that inspired me. I starting feeling that is what God wants me to do.

He said he was always reading about priests coming to Africa and started having a feeling that God wanted him to come to Africa to preach His gospel.

After finishing primary school at the age of 13, he said things were not easy at home which hampered his dream of going to the secondary school and later to the seminary.

He said he had to work for two years as a labourer in a grocery shop to make some money to support the home.

“I still wasn’t happy because this is not what I wanted to do so I came across a Divine Word Missionaries Magazine and it inspired me so I went to the Minor seminary in England at the age of 15 and each holiday I came home, I had to work to get some money to buy clothing.

“When I was 18, I then made a decision to enter the major seminary so I applied and I got admission but I was given a long list of items to bring and I didn’t have the money to buy them. I was ,however, able to get all the things with the exception of my black cassocks which then cost 10 pounds,” he explained.

He said with just two weeks left, he experienced the hand of God in his life when he received a letter from an anonymous donor, with 10 pounds in the envelope, asking him to be a good priest.

Touching on his journey to Ghana, he said he came with one other priest who advised they come by boat.

“I came to Ghana with another priest and he advised that we should go by boat. There were about 15 of us ordained from our class and some were going to Brazil, some to India but two of us volunteered for Ghana and that was our first choice.

“So we decided to take the boat. We got a boat from Dublin to Liverpool then we joined another boat to Ghana. It took us 13 days on the high seas,” he stated.
He said the priest he came with, however, left after just three months because he could no longer stand the hardship.

“And the day he was leaving Takoradi was the day I got a telegram from my father to say my eldest sister was killed in a motor bike accident and that devastated me. So I went home but I missed the funeral.

“I came back and things were difficult and i really struggled but by the grace of God, I am still here and I thank God. At a point, I felt like going back home but with the help of God and the wonderful people of Osu who encouraged and supported me, I am still here,” he noted.

Father Campbell said his first encounter with a healed leper was in 1974 as a young priest at the Holy Spirit Cathedral at Adabraka.

He said he was one morning working out in the garden of the church when the healed leper showed up with a bag of mangoes as a gift for him.

“I gave all of them out immediately because I thought I will get leprosy. But I later told myself this is not right so I went out to Weija and I was devastated when I saw the condition of the place so I told myself this is what God has called me to do and I decided to help them.

“So I started the Leprosy Aid Committee and we started raising money, having sponsorships to support them,” he stated.

He said the biggest problem with leprosy was the stigma, something he said enough education was needed to curb.

“Even to this day, people are afraid of going near them. People need to be educated,” he said.