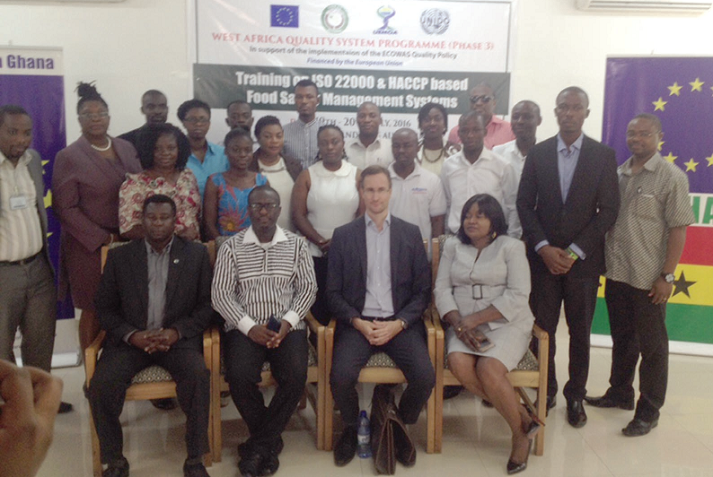 Participants of the training program in a group photograph
30.5k Shares

The West Africa Quality System Programme (WASQP) intends to designate three accreditation bodies for conformity assessment institutions in three West African countries. This is part of its phase three of its programme

This was disclosed by the National Technical Coordinator of WASQP, Mr John Oppong-Otoo, at a training programme on food safety, organised by the Ghana Standards Authority (GSA).

He said the regional accreditation bodies would act as third parties who would give certification to other institutions to enable them conduct conformity assessment activities in the areas of testing, certification and inspection.

The participants were trained in skills certification, food processing, auditing accounting, requirements of ISO 22000 and the HACCP-tool used to analyse associated hazards in production among other things.

The WASQP, being funded by the European Union (EU) and implemented by UNIDO, is a support programme that aims at helping to implement the quality policy of ECOWAS countries.

EU is funding the third Phase of WASQP that was launched in 2015 with €12,000.00 to help organise various training sessions for quality safety personnel in the 15 member states.

The first phase of the programme was introduced in 2001 to 2005 while the second phase was launched in 2007 for a period of five years with the aim to strengthen regional economic integration and trade by creating an environment that facilitated compliance with international trade rules and technical regulation.

Mr Michael Seneyah, the Head of Standards at the Ministry of Trade and Industry (MOTI), during the opening, described the training as very strategic to help train more personnel on food safety adding “food safety is a matter of concern for all.”

He said Ghana had been facing a lot of challenges in exporting food products hence the need to build capacities of those who worked to ensure that products met required regulations and international standards.

The Head of Macroeconomics and Trade Section, European Union Delegation to Ghana, Mr Christian Peters, said the funding of the programme was part of EU’s commitment to promote development in Africa.

Mr Peters said last year Ghana exported more than 1.4 billion Euros of products comprising canned tuna, vegetables, fruits and peanuts to the EU markets and, therefore, there was the need for such a training to inform officials on current standards to boost Ghana’s exports.