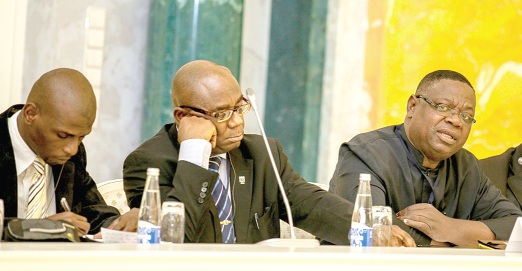 The West African Union of Tax Institutes (WAUTI), together with the Asia-Oceania Tax Consultants’ Association (AOTCA) and the Confederation Fiscale Europeenne (CFE), have tasked themselves to establish a Global Tax Advisers co-operation forum.
The forum is to enable them to co-operate to deepen the existing levels of co-operation for the better structuring and operation of the world’s tax systems, securing and maintaining the rights of taxpayers and ensuring the continuing role and rights of tax advisers throughout the world.

The individual member cities will also report back to their respective bodies as to how this might be achieved.

Known as the St Petersburg Declaration, the agreement was reached after the bodies met on September 20 at an international tax conference in St Petersburg, Russia to review developments in taxation across the world, particularly in their respective regions.

Mr Mike Kofi Afflu, the President of the Chartered Institute of Taxation (Ghana), siigned on behalf WAUTI as its President; Mr Jiri Nekovar singed for CFE and Mr Thomas Lee for AOTCA.

A release issued by CIT Ghana said in signing the agreement, the presidents of these three associations recognised the role of the tax advisers’ profession in the development of tax policies and the promotion and enhancement of taxpayer rights and their responsibilities’ under taxation law.

WAUTI has member tax institutes from 16 West African countries, while AOTCA and CFE have member bodies from 22 and 25 countries respectively.