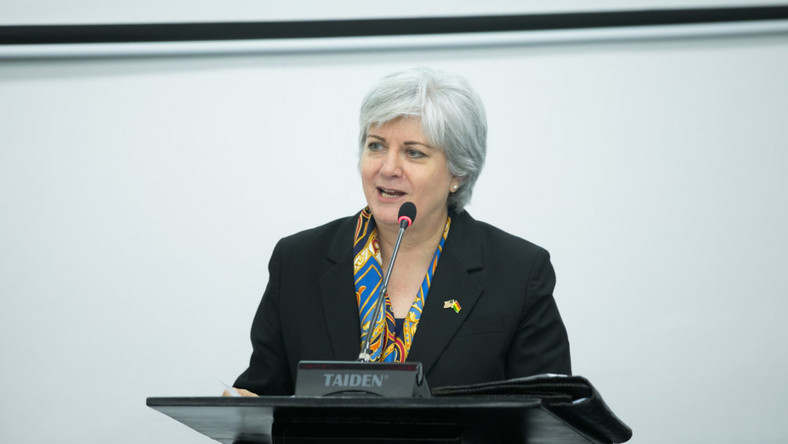 A top priority of the United States (US) government is the promotion of inclusive economic growth, increasing trade and investment between the US and countries in Africa.

It says that Ghanaian entrepreneurs are central to the above effort, such that it aims to support and develop entrepreneurs through programmes such as the Academy for Women Entrepreneurs (AWE) because they can be powerful engines for economic growth and job creation.

As part of the Global Entrepreneurship Week (GEW 2021), the embassy highlighted entrepreneurs and gave them the chance to share their entrepreneurial stories and to inspire a new generation of entrepreneurs.

One such is the Chief Executive Officer (CEO) of Alfie Designs, apparel company, Mrs Adjo Dede Asare, who said she was employing problem solving models to appeal to an international market.

She said the COVID-19 pandemic might have choked global supplies chains into recession but not for Ghana’s apparel industry.

“Things just exploded. We grew from 150 to 450 workers, we run three shifts, worked seven days a week, and for us it was great because then we expanded , our efficiency went so high we could effectively compete with our Asian counterparts in production.”

“I will say COVID was a blessing for us, our workers and anybody who came to work with us. The whole supply chain was filled and it continued until March this year. And the intervention by the government to have everything made in Ghana was a major booster to us, ” she said in a documentary.

From a young age she decided to take the business which was started by her mother to the next level.

Consequently, following her exposure to the US Yali programme she was able to transform the family business to a global brand.

Her business model for Alfie Designs is community centred.

“So from 2008 I joined my mother and we started with 30 workers, we had private labels, did trade shows, we had retail outlets and at a point we went into franchising, and bit by bit we grew to 70 and to 90.”

“W did uniforms for the Ministry of Education from whence I developed the taste for mass production,” she recalled.

“So, after my fellowship I retuned and hit the ground running. I got pitched in a business plan competition,” she said.

Her company started a school to train people for free so as to help them to gain employable skills.

“Due to COVID-19, there have been a lot of interruptions in the supply chain, especially for the export side. But because of the news media and the projection of companies working people now trying to move if not all some of their production to Ghana and it is a good thing,” she said.

She added that “at first we struggled to get people to notice Ghana for mass production but now COVID has put us out there as an alternative to India, China.  We have made new clients.”

She said the prospects were bright for Ghana’s apparel industry.

Among Dede’s major challenges as an operator in the apparel sector is the cost of utilities, especially electricity and water.

“In spite of the Africa Continental Free Trade Area (AfCFTA), if Ethiopia or Kenya receives government’s subsidies to produce everybody will go there because they will be cheap,” she said.

As the world celebrates GEW, she urged the youth to remain true to their dreams while impacting their society through problem solving initiatives.

“A great entrepreneur is someone who is solving a current and future problem. So, your product or whatever you are doing, what is going to solve, today, tomorrow and the next 10 years?, she quizzed.

They have inline checkers, quality control and at the end of every production cycle is also checked.

“In the next five years we hope to have a 10,000-seater factory that will produce for the whole of Africa and post Ghana on the map as the next destination for mass production,” she said.

The US Embassy also commemorated the week with a conversation on ‘Academy for Women Entrepreneurs: An Institution for Sustainable Employment,’ with the Project Director at the Regional Leadership Centre (RLC) for West Africa for the Young African Leaders Initiative (YALI), Dr Mrs Shola Sarfo-Duodo.

Dr Mrs Sarfo-Duodo explained the AWE programme launched in 2019 by the White House and funded by the Bureau of Education and Culture of the US Department of State, sought to teach women around the world to become successful entrepreneurs.

“The goal is to empower 50 million women worldwide by 2025 to fulfill their economic potential, with a goal to creating conditions for increased stability, security and prosperity for all,” she said.

She said the AWE was unique because it brought together a pool of enterprising young women drawn from all sectors of the economy to network and harness their potential, with the ultimate aim of improving their businesses.

“Basically, entrepreneurship is not for everybody, some do it by choice and some are forced into it. So, one needs to take a personal test to able to build a business, it requires resilience,” she urged.