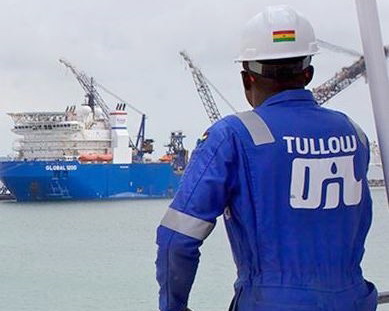 Tullow Oil plc, one of the biggest players in the country’s oil fields, is to raise £586 million through a Rights Issue in a move expected “to assist the Group to accelerate the reduction of its debt.”

A circular to shareholders on March 21, 2017 and signed by the Chairman of Tullow Oil plc, Mr Simon Thompson,  said the Group would convene a general meeting in London on April 5, 2017 to seek approval from shareholders.

At the meeting, shareholders will be asked to consider resolutions authorising the directors of the company to take certain actions in connection with Rights Issue.

The circular said “The proceeds of the Rights Issue (expected to be approximately £586 million net of expected issue costs and expenses), together with the Group's cash flow from production growth and portfolio management activities, are expected to assist the Group to accelerate the reduction of its debt”.

“The Directors believe this stepped reduction of debt will improve the company’s financial and operational flexibility, and enable growth within the next three to five years by allowing the Group to: invest in further infill drilling opportunities in both its operated and non-operated portfolio; undertake exploration and appraisal around the Jubilee and TEN fields to further develop the high return near field resource base; undertake further exploration and appraisal activity in Kenya to further shore up the resource base; drill high impact, potentially high return prospects across the company's African and South American portfolio; and finally take advantage of other opportunities that industry conditions offer.”

Accordingly, the circular said “it is very important that shareholders vote in favour of the resolutions to be proposed at the General Meeting so that the Rights Issue may proceed.”

“The Rights Issue is being made to existing shareholders (although, with certain limited exceptions, not those in the United States, Canada, Australia, Hong Kong, Japan, New Zealand, Ghana, the People's Republic of China or the Republic of South Africa (the "Restricted Territories")) and is conditional, among other things, upon the passing of the resolutions at the General Meeting.”

It noted emphatically, however, that in the event that the resolutions are not passed at the General Meeting, the Rights Issue would not proceed.