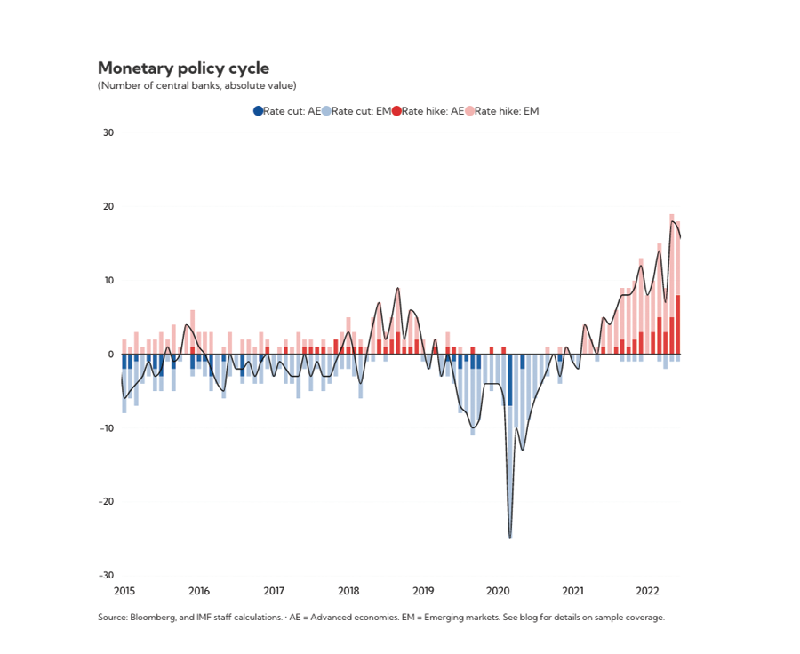 With inflation at multi-decade highs in many countries, central banks pivoted toward higher interest rates. Our chart from August showed the increasingly synchronized monetary policy cycle around the world. — IMF
30.5k Shares

To describe the year 2022 as a wild year would be an understatement for many businesses and finance ministers across the world.

It was a year that further exposed the concept of globalisation, where the global economy seemed flawlessly intertwined in one harmonic symphony, if one can describe it as such.

An event anywhere in the world has lingering impact on many economies if not all, irrespective of whether you live in Gyakiti, a little village in Akwamufie of the Eastern Region or in a Penthouse on a 50-storey sky scrapper in Manhattan, New York.

This was a year in which the disruption to the global supply chain on account of the protracted COVID-19 pandemic was at its peak. It was also a year in which the Russian-Ukraine crises caused food shortages and increased crude oil prices across the world. These brought in their wake, soaring world prices of basic commodities, depreciation of global and local currencies, an upward surge in fuel prices and transportation costs, a growing unemployment and an upward adjustment in the general cost of living never seen on a global stage as witnessed in the year 2022.

Such was the scale of global crisis that almost half of the countries in the world experienced inflationary pressures. Countries such as UK, US for the first time in decades experienced double digit consumer price indexes (inflation).

While those countries that have traditionally been immune to higher inflation such as China were having for the first time also spikes in the prices of goods and services.

On the African continent, Senegal recorded a spike in inflation to-13 per cent, Gambia 13.3 per cent, Sierra Leone 29 per cent, Nigeria 21 per cent, Egypt 16.2 per cent, for the same period.

In a dramatic turn of events in the United Kingdom, one Kwarteng, the first Chancellor of the Exchequer of African origin or Ghanaian parentage to be precise, was swept off from his position to oblivion in just under 40 days of coming to office.

A year that saw countless demonstrations across Europe especially among countries sculpted as examples of stable economies such as the Scandinavian regions where social welfare economy is a model envied by many. These are a few examples of the whirlwind of change that has characterised the global economy the year that was, 2022.

Back home in Ghana, our story was no different. The effects of these global crises were dire on the Ghanaian economy and exposed our vulnerabilities.

An emboldened opposition as a result of the near split in the house of parliament saw an opportunity to flex their muscles to show the government “where power lies”.

For the first time since the Limann Administration in 1980, the budget was rejected. Chaos reigned in Parliament, disorder and uncertainty set in and foreign investors got the bait. They backed off our bonds.

The rating agencies sank their teeth into the lack of confidence in the economy and our inability to pass the Electronic levy (E-levy) on time. They downgraded our economy from B+ to B- and then to C, effectively shutting the door to the international market in our face.

Eventually, the budget was passed three to four months late but the harm had already been done.

Our economy was badly exposed, the cedi wobbled and the speculators ran riot. The Finance Minister got the memo- “You are going to be sacked- tomorrow”, a familiar song by football fanatics for non-performing managers in the English Premier League.

In the midst of this despair, fuel prices “broke the eight” cedis per litre mark into double digits for the very first time.

Our debt to Gross Domestic Product (GPD) was nearly 90 per cent, taking us back to the days of Highly Indebted and Poor Country (HIPC).

Inflation soared “kitikiti… katakata” to 50 per cent at the end of November, as if it wanted to “bambam with the big boys” of Zimbabwe, Sudan and Sri Lanka in very unfamiliar company.

Interest rates hikes as a result of the central bank’s monetary tightening measures did not help matters either. It begged the question, which business would be able to compete with the cheap imports from China with the prevailing interest rate regime of about 40 per cent?

In the end Ofori-Atta became the target of some frustrated Ghanaians. Not a single evidence could be adduced by his accusers to support the claim that his “incompetence” was the cause of our economic woes.

He chalked up many firsts as Finance Minister in his six years in office.  The most popular one - the first to face a Censure Motion in Parliament. He survived, amidst his own “kin” baying for his blood- another first.

The cedi took such a beating in a spate of about two months so much that on a daily basis, one could not escape the depressing news of its unsteady legs as trumpeted on roof tops by the seemingly “trigger happy” opposition elements with a rather vociferous media anchoring the news to whoever would care to listen to them.

Some even mocked that the cedi had indeed escaped from jail where it has been under lock and key while the dollar was on roaming service.

Then came in a lone voice of reason in the wilderness, “Sika Mp3 dede”, a reassuring statement longed for by many. Coming too late but perhaps setting the tone for a sea-change in the country’s fortunes.  Better late than …………..

The whole populace went into a well-deserved hiatus as the Qatar World Cup Football festivities took hold of our national pride, the Black Stars. Bringing some semblance of joy to an otherwise “disheartened people”.

That hope and excitement was however, short-lived. Our optimisms dashed once again by Dede Ayew’s missed penalty against the same old familiar foe. That hurt more than a Luis Suarez bite on the ear.

In the end we rejoiced at our neighbour’s failings, rather than of our own. Very typical of us, “Konongo Kaya” indeed.

The 2023 Budget presented by the embattled Ofori-Atta, was passed amidst the usual rancour in Parliament. This time, however, without the feisty contest that we experienced during the 2022 Budget debate, the result of which nearly plunged us into an abyss.

A core element of the 2023 Budget Statement is the road map for the debt exchange programme. In short, cut your coat according to the proverbial coat size, thus ending the speculation on a three–year IMF deal meant to restore confidence in the economy.

The effect of this is the cedi bouncing back to life. A roller-coaster journey for the economy. In all these, the average Ghanaian has been the loser. The almost 100 per cent increases in prices of almost everything is a killer. Incomes have been eroded and purchasing power Gone with the Wind.

Business have felt the pinch most. With higher than budgeted recurrent expenditures, increase in taxes and a gun-to-head labour agitations for pay rise-the least said the better.

In all sincerity, 2022 has been one of the difficult years Ghanaians have endured in recent memories.

For many businesses, the thought of what happened between 1999 and 2000 in which the cedi lost over 50 per cent of its value and also in recent times in 2014, where some “superstitious characters” were blamed for the unstable cedi must be a thing of the past.

It thus calls for urgent and direct interventions not the usual election sloganeering that is only good for soundbites. The rhetoric must stop. Time for hard work and serious rethinking of the structure of the economy is NOW.

Lessons learnt; let 2023 be much better. It can only be better if we get the fundamentals right. Growing the indigenous economy is one sure bet.