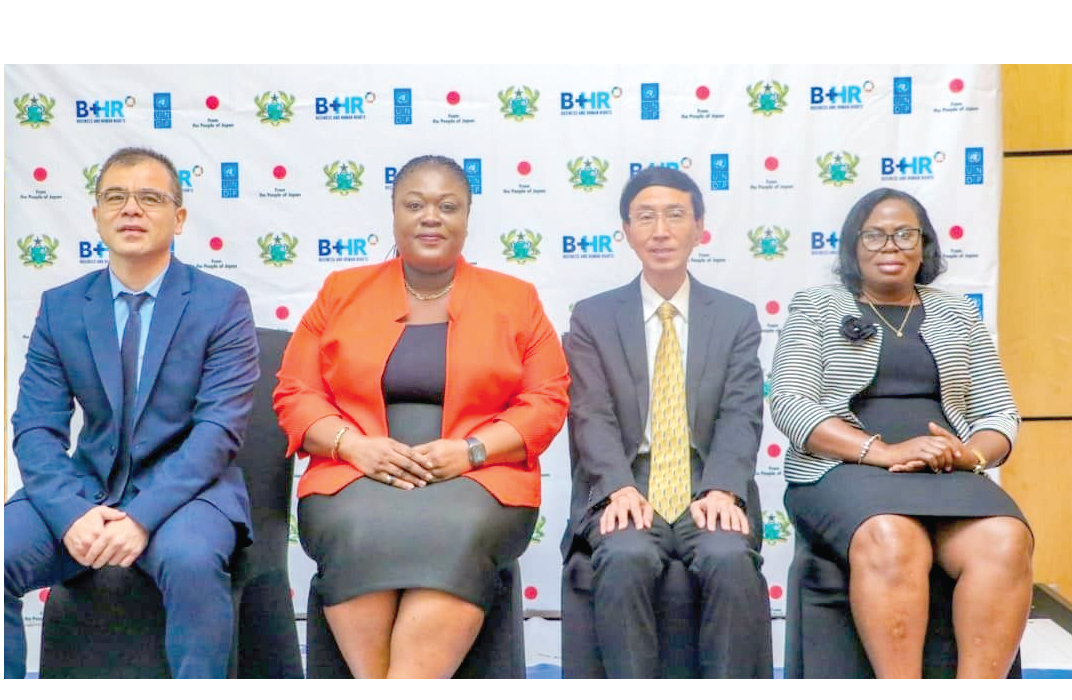 Sukhrob Khoshmukhamedov (left), the Deputy Resident Representative for UNDP Ghana; Diana Asonaba Dapaah, the Deputy Attorney-General and Minister for Justice (2nd from left); Mochizuki Hisanobu (3rd from left), the Japanese Ambassador to Ghana, and Mercy Larbi, the Deputy Commissioner for CHRAJ after launching the project in Ghana
30.5k Shares

The United Nations Development Programme (UNDP) has launched a project to improve human rights standards in businesses in Ghana.

Christened “Business and Human Rights (B+HR)”, the project seeks to strengthen efforts to better equip government and companies to understand and act on their duties and responsibilities to prevent human right abuses such as forced labour, land grabbing and discrimination, among other things.

Funded by the Government of Japan, the project which will be implemented in collaboration with partners in government, private sector and civil society is on the theme: “Promoting Responsible Business Conduct with a particular focus on promoting human rights due diligence in global supply chains and leveraging the UN Guiding Principles on Business and Human Rights for a just recovery”.

At the launch of the B+HR project in Accra last Tuesday, the Deputy Resident Representative for UNDP Ghana, Sukhrob Khoshmukhamedov, said the project would promote responsible business practices aimed at protecting human rights in 17 countries, including Ghana.

“As the development actor with the largest dedicated field presence in this thematic area, the UNDP has supported businesses in tackling social justice issues, both within their operations and in advocating wider policy and regulation changes mostly in Asia and hope to do so in Africa and other parts of the world as well. Based on our experience, we have completed the English version of a training guide for conducting Human Rights Due Diligence, which will be used for the training sessions in the project,” he said.

To achieve this, he said the UNDP would support Japanese companies and their suppliers in managing human rights risks potentially associated with their operations.

The companies, he said, would also benefit from the process, as businesses that demonstrate clean operations had clear advantages in placing their products on the market.

He said the second objective of the project was to help the 17 targeted countries develop policies to tackle business-related human rights abuses.

“The UNDP will work with the government to create a level playing field that will motivate more companies to embrace responsible business practices,” Mr Khoshmukhamedov added.

The Japanese Ambassador to Ghana, Mochizuki Hisanobu, said there was an international trend that businesses needed to follow the international human rights standards, where UNDP had played a significant role.

While the promotion of human rights at the business level itself was important, that was also crucial because that was the way companies could remain internationally competitive.

“While it is of course essential that companies actually respect human rights, it is most important that companies can prove such an attitude by conducting due diligence in the current international trend. By doing so, companies can not only mitigate legal and reputational risks but also appeal to workers to whom they are offering an attractive working environment and ultimately improve their competitiveness,” he said.

In her opening remarks, the Deputy Commissioner for Commission for Human Rights and Administrative Justice (CHRAJ), Mercy Larbi, said Ghana was in the process of developing a National Action Plan on Business and Human Rights anchored on three pillars: respect, protect and remedy.

She said currently, a steering committee was in the process of drafting the action plan which would be ready by the end of the year.

Ms Larbi stressed that as a requirement for corporate responsibility, businesses would be required to provide human rights due diligence (HRDD) as a prerequisite to operate in the country, adding that “the action plan, when ready and in operation, will go a long way to improve the human rights situation in Ghana.”