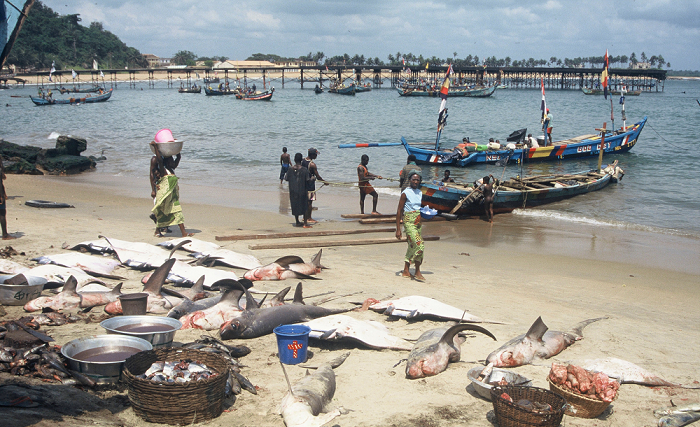 A draft policy is currently before the Attorney-General's (A-G's) Department awaiting approval for the development of the new policy instrument to tackle the gaps in the present act. Follow @Graphicgh

The government is in the process of rewriting the Fisheries Act, 2002 to address key challenges in the country’s fishing industry. A draft policy is currently before the Attorney-General's (A-G's) Department awaiting approval for the development of the new policy instrument to tackle the gaps in the present act.

The new bill, when passed into law, among other things, is expected to make it mandatory for any person or an organisation that intends to conduct any activity related to the country’s aquatic resources (other than fishing) to seek approval from the Fisheries Commission.

“Because it is not mandatory for the oil companies in the country to seek approval from the Fisheries Commission, the companies do not comply with section 93 of the Fisheries Act,” the Head, Administration and Operations Division of the commission, Mr Nemorius N. Peng-Yir, said at an encounter with MDA’s in the oil and gas sector last Tuesday, March 21, 2017 in Accra.

The event was part of the CSPOG-GOGIG 2016 election project phase two and was on the theme: “Options for addressing governance challenges in the oil and gas sector.”

Section 93 (l) of the Fisheries Act for example stipulates that: “A person or government department or other agency planning to conduct any activity, other than fishing, which is likely to have a substantial impact on the fishery resources or other aquatic resources of Ghana, shall inform the Fishery Commission of the plans prior to the commencement of the planned activity with a view to the conservation and protection of the resources.”

Sub-section two of the same Act further states that: “The commission may make or require reports and recommendation by those conducting the planned activity regarding the likely impact of the activity on the fishery resources or other aquatic resources of Ghana and possible means of preventing or minimising adverse impacts, which shall be taken into account by the person, government department or other agency in the planning of the activity and in the development of means of preventing or minimising any adverse impacts.”

“The requirement under this section shall be in addition to any other requirement of the Environment Protection Agency,” Sub-Section three of the act underscored.

Mr Peng-Yir explained that following a review of the present law the commission had identified various gaps which organisations, especially those in oil and gas sector, have been taken advantage of over the years; hence, the need for a total rewrite of the law to ensure strict compliance in the industry.

“Therefore, the new policy would strictly ensure that the commission would conduct a fisheries impact assessment exercise on the activity of any company with the aim to operate on the country’s aquatic resources,” he said.

Complying with the current regime

For his part, the Chairman of the Civil Society Platform on Oil and Gas (CSPOG), Dr Steve Manteaw, said only one out of the various oil companies operating in country had complied with the current regime.

The chairman observed that because the Environment Protection Agency and the Fisheries Commission lacked a research vessel for gathering baseline data on the country’s offshore environment, “its puts the country in a situation where it has to accept findings of environmental and social impact assessment without means of verification.”

In 2010, Ghana joined the league of oil producing countries with mixed feelings of anxiety and great expectation.

Indeed, the deep and conflicting emotions of hope and trepidation had played out pretty strongly in the public discourse around the development of the governance framework for the emerging oil and gas sector in the years preceding first oil.

This was predominantly because Ghanaians had come to appreciate from firsthand experience how weak and unaccountable governance of the country’s mining sector had led to the creation of an enclave that had no forward and backward linkages with the rest of the economy.