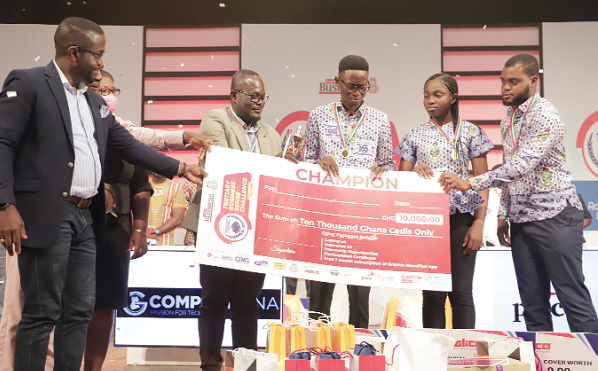 The university, which was appearing in the finals of the competition for the second time in a row, convincingly beat two-time champions, the University of Cape Coast (UCC), and maiden finalists, the University for Professional Studies, Accra (UPSA), in a heated contest held at the National Theatre in Accra yesterday.

Ably represented by Lord Kelvin Kofi Atisu, a Level 400 Banking and Finance student; Vivian Nsiaa Nyantah, a Level 400 Accounting student, and the substitute, Eric Ofosu, a Level 300 Accounting student, KNUST, which demonstrated its determination to annex the trophy right from the start of the competition, won with 53.2 points, while the UCC followed with 47.7 points, with the UPSA in third with 30.2 points.

For its prize, the KNUST, the pride of the Ashanti Region, received GH¢10,000 cash, four laptops, GH¢30,000 insurance cover for each contestant, free subscription to the Graphic Business newspaper, certificates of participation, internship opportunities with institutions of the sponsors and souvenirs from sponsors.

The UCC received GH¢6,000 cash, four tablets, GH¢30,000 insurance cover for each contestant, free three months’ subscription to the Graphic Business, certificates of participation, internship opportunities with institutions of the sponsors and souvenirs from sponsors.


The UPSA also got GH¢4,000 as its cash prize, GH¢30,000 insurance cover for each contestant, four smartphones, certificates of participation, internship opportunities with institutions of the sponsors and souvenirs from sponsors.

As early as 9 a.m., supporters of the three participating schools had gathered at the National Theatre, singing and dancing to celebratory (‘jamma’) songs as they awaited the call of the master of ceremonies for them to be seated.

Numbering more than their opponents’ supporters, students of the UCC who were determined to retain their crown constantly waved their school flag and moved in circles as part of their strategy to intimidate their rivals.

They did the same when they were finally invited into the hall for the contest to begin.

However, in spite of their smaller numbers, the KNUST and the UPSA students stuck to their plan by cheering their contestants on with songs.

In the first round, the KNUST indicated its intention, answering almost all the questions asked and also picking more than 90 per cent of the bonus points from its opponents.

In that round, the KNUST amassed as many as 25 points. The UPSA, after answering only one out of eight major questions, earned three points, while the UCC had 12 points.

The second round, which centred on calculations, was a tough one, as all the three school, struggled in getting their answers right.

However, out of the seven major questions for each school, the UPSA led the round with seven points, the UCC earned six points and the KNUST five.

In the third round, which was for students to make business arguments out of a case study, the UCC scored 7.7 points, the KNUST had 6.2 points and the UPSA 6.2 points.

In Round Four, which was the Graphic Business segment, the UCC led again with 19 points, after answering all its major questions and some bonus questions, while the KNUST earned 10 points, with the UPSA garnering seven points.

In the fifth and final round, the KNUST earned four points, the UCC had no point and the UPSA had four points.

In his remarks before the contest started, the acting Editor of the Graphic Business, Charles Benoni Okine, said the contest, which was meant to create a platform for students in tertiary business schools across the country to demonstrate their knowledge in their fields of study, had come to stay.

He urged the students to keep reading the Graphic Business every Tuesday to obtain more information which could help them not only in future contests but also enrich their knowledge for the future.

He also praised companies that gave technical support, such as the Chartered Institute of Marketing, Ghana, with media support from the Daily Graphic, GraphicOnline, TV3 and Connect FM.