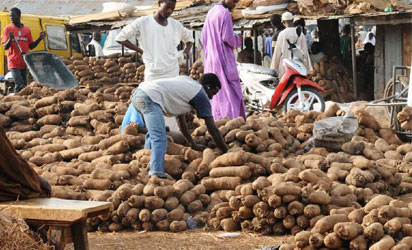 The Ministry of Agriculture will, in the second half of this year, distribute additional 35,349 metric tonnes (MT) of improved seeds and 405,480 MT of fertiliser to 1.5 million beneficiary farmers across the country.

The Minister of Finance, Mr Ken Ofori-Atta, who announced this said the above intervention was expected to contribute to an estimated production volume of 3.6 million MT of maize, 1.1 million MT of rice, 232,600MT of soya beans, 67,500MT of sorghum, 12,500MT of cowpea and 10,000MT of groundnuts.

He said the government continued the implementation of the five main modules of the Planting for Food and Jobs (PFJ) flagship programme.

“The aim is to sustain the gains achieved in increased productivity of selected crops, food security and job creation after a successful first phase from 2017 to 2020,” he said when he presented the Mid-year Fiscal Policy Review of the 2021 Budget Statement and Economic Policy to Parliament in Accra on Thursday, July 29, 2021,

He said in the first half of 2021, the ministry procured and distributed 4,666MT of improved seeds and 120,520 MT of fertiliser to beneficiary farmers in the southern sector.

Touching on the Rearing for Food and Jobs (RFJ), Mr Ofori-Atta said in the period under review, about 86,000 cockerels, 1,500 small ruminants, 43,200 broiler day old chicks and 1,500 pigs were procured and supplied to beneficiary farmers.

An additional 144,000 layers and 100,000 broiler day-old chicks have been ordered for distribution to beneficiary poultry farmers across the country.

Also, 1,200 poultry battery cages were procured to house the 144,000-day-old chicks after they have been brooded to layer pullets. The cages will be distributed to 1,200 female poultry farmers.

“The ministry completed the construction of 10 out of 11 livestock housing units and 11 mechanised boreholes for 11 livestock breeding stations. In the second half of 2021, it will take delivery of the 144,000-layer pullets and 100,000 broiler day-old chicks and distribute same to 1,200 female poultry farmers and 200 poultry farmers, respectively.

The Greenhouse module of the PFJ programme was wholly embraced because of its potential benefits to actors along the vegetable value chain and the economy as a whole.

According to the minister, the management contract for the three Greenhouse training centres with commercial components at Dawhenya, Akumadan and Bawjiase has ended.

He said the ministry was in the process of recruiting a management consultant to manage the commercial units of the greenhouses.

“Additionally, the ministry completed the establishment of 100-kit commercial greenhouse production unit at Dawhenya. As at end-June 2021, 60 graduates have completed training in greenhouse technology at the three 44 training centres.

So far, over 80 individual farmers, farmer-based organisations and service providers benefitted from the subsidised farm machinery.

In addition, 1000 units of handheld motorised rice reapers were distributed to the 16 Regional Departments of Agriculture offices for distribution to selected 247 rice farmer groups nationwide to enhance the mechanisation of paddy rice harvesting.

Mr Ofori-Atta said over 200 tractor and combine harvester operators and mechanics were trained in the Adidome and Wenchi Farm Mechanisation Centers to effectively handle the agricultural machinery.

The ministry continued to increase surveillance on fall army worm (FAW) infestation across the country.

Consequently, during the period under review, a total of 97,000 litres and 14,000kg strategic stocks of insecticides were procured and distributed to all 16 regions for FAW management.

“A total of 47,168 Ha was sprayed and recovered. In the second half of 2021, the ministry will procure two screen houses and three mass biological rearing facilities for rearing and release of three million parasitoids for control of FAW,” he said.


One District One Warehouse

In support of the “One District One Warehouse” intervention, the ministry initiated the construction of 30 warehouses.

So far, 22 out of the 30 warehouses have been completed and the remaining eight are scheduled for completion by the end of 2021.

“The ministry officially took over the 50 warehouses that were being constructed under the erstwhile Ministry of Special Development Initiatives (MSDI). At the time of takeover, 42 of the projects were completed and the remaining eight scheduled to be completed by end of 2021,” he added.