Gold for oil: First consignment arrives in Ghana next week 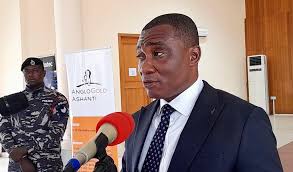 The first consignment of fuel in the government's gold-for-oil deal will arrive next week, a Deputy Minister of Lands and Natural Resources, George Mireku Duker, has disclosed.

"We have put all the lines together and we believe that we are ready to kick-start it.

“It is good and will help cushion our currency, so all must support it," he said.

Mr Duker added that while he was certain about the arrival of the oil next week, the volumes would be determined within the week.

Mr Duker made this known in an interview with journalists after the Minister of Lands and Natural Resources, Samuel Abu Jinapor, had led a team to pay a courtesy call on the management of the Ghana Chamber of Mines (GCM) yesterday.

The meeting with the GCM was part of engagements the Lands and Natural Resources Minister is having with key players in the mining industry to explore opportunities to address challenges confronting the sector.

The meeting discussed issues such as fiscal regime stability, security of the mines, the impact of galamsey activities on mining concessions and how those activities could be addressed and also how to strengthen the local content value chain to create more manufacturing opportunities.

Mr Duker said the gold-for-oil deal would help resuscitate the economy, for which reason all hands must be on deck to accept it.

He noted that when the deal was rolled out fully, it would help regulate the downstream side of mining.

There have been concerns that the gold-for-oil deal will cripple the gold export market.

Some players in the mining value chain, especially exporters, have also said they had not been consulted on the deal.

However, Mr Duker said all such concerns were being handled on "a case-by-case basis".

"Yes, there are concerns by some of the stakeholders that there have not been extensive deliberations on the deal, but we are still engaging all who matter. There are gaps, and this is normal with every new concept. We will reconcile and get everyone on board," he said.

Commenting on the gold exchange for oil programme, the President of the GCM, Joshua Mortoti, said the chamber was still seeking more knowledge on the deal.

"It is a government policy that is being rolled out, so we want to understand it well and know the role we will play in it," he said.

He said the GCM supported the domestic gold purchase programme rolled out by the government because the process was consultative.

"The domestic gold purchase programme came with really strict rules around the pricing of the gold, volumes of the gold and when it will be done. And it was done with the Bank of Ghana, so I can talk about that because we crafted it together in a very collaborative manner with the government.

"With the gold-for-oil, we need a bit of understanding on our side to know more about the programme," he said.

When asked whether the deal was feasible, he said he could not pass value judgement on the initiative until he fully understood what it entailed.

"We know gold production, but we do not know the oil industry and will not pretend to know. So there is a bit of engagement required from both sides," he added.

In December last year, Vice-President Dr Mahamudu Bawumia announced that Ghana had concluded talks for the operationalisation of the gold-for-oil policy.

He indicated that under the deal, which was similar to a barter, Ghana would receive cheaper fuel in exchange for gold.

The Vice-President also said the first oil products under the policy would be delivered in January this year.

According to him, the arrival of the fuel from the United Arab Emirates (UAE) was expected to push the prices of fuel down.

Again, Dr Bawumia said, the gold-for-oil deal by the government was meant to tackle dwindling foreign currency reserves and the demand for dollars by oil importers, which was weakening the cedi and increasing living costs.