A Ghanaian, George Kporye of Golden Exotics Limited has been nominated for the 2016 global Fairtrade Awards that celebrate producers, workers, traders and individuals that go the extra mile for a fairtrade in the agricultural sector.

Golden Exotics Limited is a leading banana producer company in West Africa and based in Ghana. The company received Fairtrade Certification and started selling banana under the product certification system in 2013 and has since been receiving premiums by selling bananas to Fairtrade.

The final winner from the ten short-listed candidates would be selected based on a VOTE from the public. Polls for the award will run until December 18, 2016, 12:00 (GMT).

The winner will be notified by the end of the year but it will officially be announced during the awards ceremony in Berlin on March 3, 2016.

Mr Kporye was nominated for the awards because of his continued advocacy for the empowerment of workers that inspired the farm management of Golden Exotics to pursue Fairtrade certification.

With his leading of an inclusive certification team, the Golden Exotics plantation was able to take the steps to get certified in record time.

He knew that certification was only the start and Fairtrade sales were needed to bring workers the greatest benefit – so he traveled to Europe with the Ghanaian Minister of Trade to market the farm’s Fairtrade bananas.

He was so successful that the Fairtrade Premium Committee has been very busy ever since: Thanks to high Fairtrade sales and Premium payments, workers have been able to implement a number of education, nutrition, health care and training projects for their community.

He shared his learnings at local and international conferences to encourage others and support them on their way towards Fairtrade certification.

Fairtrade is an alternative approach to conventional trade and is based on a partnership between producers and consumers.

When farmers can sell on Fairtrade terms, it provides them with a better deal and improved terms of trade.

This allows them the opportunity to improve their lives and plan for their future.

Fairtrade offers consumers a powerful way to reduce poverty through their every day shopping.

When a product carries the FAIRTRADE Mark it means the producers and traders have met Fairtrade Standards.

The Fairtrade Standards are designed to address the imbalance of power in trading relationships, unstable markets and the injustices of conventional trade. 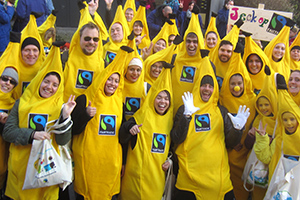