Prices of school items go up 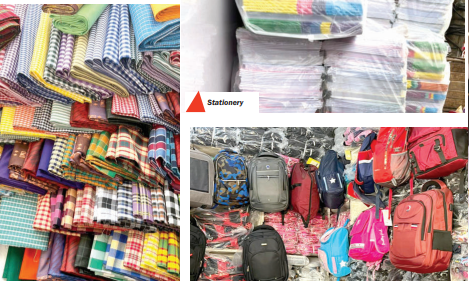 The demand for educational materials in the Central Business District of Accra has risen, as parents, schoolchildren and guardians troop there to secure items in preparation for school next week.

Items that are high in patronage are school bags, lunch boxes, pens, pencils, books, uniforms, and other educational materials.

While some private basic schools have already reopened, the public schools, together with the remaining private establishments, are expected to be in school from Tuesday, January 10, this year.

Whereas there are many trunks, chop boxes, and mattresses on display, their demand is yet to pick up because second-cycle schools are yet to reopen, particularly, for freshers.

However, the Daily Graphic team that conducted the market survey observed that the prices of items were as they were before the Christmas break.

The cost of educational items such as a pack of pencils, which used to sell at GH¢10 with the least price being GH¢12, is now selling at GH¢15.

The price of exercise books, which used to be GH¢2 is now going for GH¢5, while a regular notebook which used to sell for GH¢15 is now GH¢18, minimum.

The cost of a Teacher’s Notebook has now moved from GH¢25 to about GH¢70.

All the stationery, materials, and provisions dealers said patronage was good, considering that the country just marked Christmas with its attendant high expenditure.

A pack of three pairs of socks which used to sell at GH¢5 is now selling at GH¢10.

Shoes hover around GH¢90 and above, depending on their quality and sizes.

A customer, who gave his name as Walter ,said the school uniform he wanted to buy for his ward was expensive and wondered how many parents could afford it.

A parent, Araba Arthur, muttered about the cost of uniform per yard which was previously GH¢35 but was currently going for GH¢75.

“There’s nothing we can do now but to cut down on the number of items we intend to purchase in order to buy the uniforms whose prices are fixed, “she said.

A school uniform seller, Tanko, said: ”Sales are a bit encouraging as customers troop in and out to buy from my shop”.

A shoe seller, Esther Asare, said last year’s sales were better than this year’s, including the past festive season. “Some customers wish to buy many of such items but are compelled to make a choice due to their high prices,“ she said.

According to her, the appreciation of the cedi against the dollar did not have any positive effect on her sales, she added.

A book shop owner, Anaefi Daniel, told the Daily Graphic that “by God’s grace business is booming as you can see”