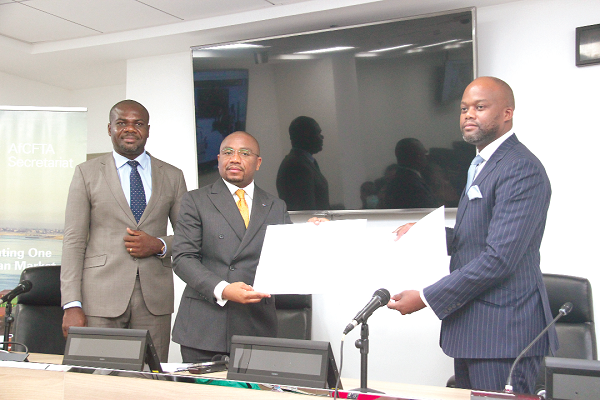 Under the agreement, the two parties are to collaborate to remove all bottlenecks affecting transit, trade facilitation, carriage of goods along the entire supply chain and eliminate non-tariff barriers.

As a result, the Secretary-General of AfCFTA, Mr Wamkele Mene, signed the agreement on behalf of the secretariat while the President of UASC, Mr Patient Sayiba Tambwe, appended his signature for the union.

This would help facilitate movement of goods, promote trade within the continent and maximise gains from the initiative.  The United Nations Economic Commission for Africa (UNECA) has projects projected that with enhanced trade facilitation  AfCFTA would increase intra-African trade by 21.9 per cent on total trade by 2022.

Addressing the press at the signing ceremony in Accra last Friday (July 9), Mr Mene expressed his satisfaction with the agreement, saying that it would pave the way for the two parties to work together to implement the AfCFTA.

“So, I want to express my deep appreciation to the union for the contributions that they are making in the implementation of AfCFTA,” he said.

He stated that shippers on the continent were often faced with a number of challenges relating to transit, trade facilitation and movement of goods impeding growth in intra-African trade.

To address the challenges, he said it was crucial to focus on the transportation of goods, clearance of goods and customs procedures.

Mr Mene said the secretariat for that reason could not solve the challenges alone, hence the need to collaborate with the private sector to design strong mechanisms to remove the bottlenecks.

“That is why this engagement, partnership and collaboration with the UASC is important because its members are on the ground and for that reason, understand the challenges better.

He observed that transport infrastructure and trade facilitation were some of the key factors to achieve the objectives of the AfCFTA initiative.

Going forward, he said the secretariat would work together with all stakeholders in the private and public space at the regional, as well as the continental level to address challenges hindering growth of trade.

“In this regard, the MoU between the AfCFTA Secretariat and the UASC is a step in the right direction as areas of cooperation include: carriage of goods along the entire supply chain, trade facilitation, the elimination of non-tariff barriers, and the promotion of intra-African trade, among others”.

For his part, Mr Tambwe stated that the agreement was intended to build a long-lasting partnership with the AfCFTA secretariat on the implementation of the initiative.

He stated that the UASC was in a better position to help the secretariat to operationalise the agreement across the continent through capacity-building, trade facilitation, monitoring and evaluation, as well as data collection.

“The union can play a critical role in the implementation of AfCFTA. And to us, it is important that this MoU is signed to create the needed path to take full advantage of the gains from the initiative,” he added.

The UASC is a 19-member body formed in 1977 and is headquartered in Douala, Cameroon. It is the umbrella body of shippers’ councils in the West and Central African sub-regions with the aim of contributing to sub-regional economic integration policies, simplifying administrative formalities in international maritime traffic, among others.

In Ghana, the UASC is represented by the Ghana Shippers’ Authority (GSA).