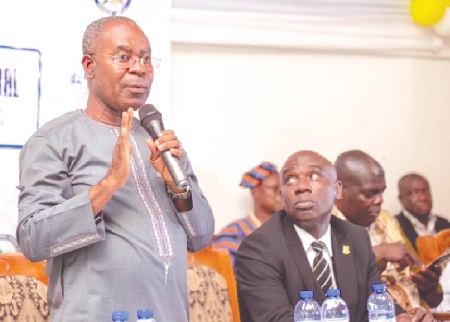 Kofi Ampofo Agyapong, board chairman of the bank, addressing shareholders at the meeting
30.5k Shares

This was revealed during the bank’s 32nd annual general Meeting held at Fomena last Saturday.

The board could not recommend the payment of dividend for the year since it has become necessary to build the bank's reserves and urged the shareholders not to relinquish their support in the ensuing year.

The increase was as a result of the attraction of new customers and the deepening of the bank's relationships with its existing customers.

It was also partly due to new branches opened at Ejisu and New Asokwa, the Chairman of the Board of Directors, Kofi Ampofo Agyapong said at the meeting.

According to him, there were some challenges in the macroeconomic environment especially with inflation increasing consistently in the last two quarters which saw it end at 12.6 percent in December 2021.

Mr. Agyapong said in spite of the challenging macroeconomic environment coupled with an unprecedented happenings like locked up funds that pertained during the reviewed year, the bank managed to pull yet another satisfactory operational performance in some key financial indicators.

This was a 14.24 per cent reduction which was GH¢5.76 million in absolute terms.

In the year under review, the bank's stated capital went up by 30.08 per cent, which culminated in GH¢1.13million in absolute terms.

The board chairman urged all shareholders to keep buying more shares to increase the stated capital to enable the bank to offer more support to its customers in order to increase profitability.

It also assisted the Fomena Fire Station of the Ghana National Fire Service (GNFS) and further provided support for the training of newly recruited teachers within its catchment areas through Ghana Education Service (GES).

Chief Executive Officer of the bank, Daniel Amponsah, said the bank’s business focus in 2022 is on driving growth, innovations, efficiency and service as the main pillars in achieving profitability.

He stressed that the bank would follow stringent cost-reduction policies; strengthen internal control measures and develop the human capital to meet demands of functioning profitability; and also achieve the objective of overcoming shocks from the unfriendly macro-economy and rising cost of living, as well as their devastating effects.