The French Ambassador to Ghana, Mr Frederic Clavier, has urged Ghana to continue to implement business-friendly policies and laws that provide incentives in order to attract more companies from his country and the rest of Europe.

The Chairman of the Board of Directors of Standard Chartered Bank (SCB), Mr Ishmael Yamson, has said the bank will continue to maintain a cautious approach to growth in risks assets while it works on restoring stressed assets back into the regular portfolio within the shortest possible time.

Reigning CIMG Bank of the Year, Fidelity Bank, has proven itself tops once again by picking three prestigious accolades at the 2015 edition of the Ghana Telecom Awards held at the weekend.

Ehizogie Binitie and Kofi Dadzie set themselves a challenge a little over 14 years ago: to create a software company that led the way for excellence in Africa.

THE Association of Ghana Industries (AGI) has taken its fight against exorbitant bank charges in the country to a new level, by requesting that the Bank of Ghana (BoG) direct commercial banks not to lend to businesses above a stipulated threshold.

Banking in Ghana has gone through many faces and major reforms, all in an attempt to make it useful to serve the needs of the country and the economy better.

For instance, a study titled ‘Financial Sector Reforms and Bank Performance in Ghana’ and authored by T.O. Antwi-Asare and E.K,Y. Addison in 2000 indicated that the financial sector reforms influenced bank performance in Ghana. 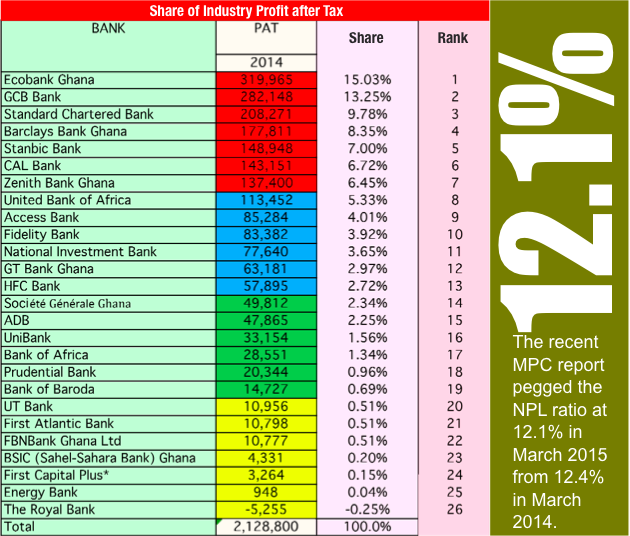 By common consent, Ghana's banking sector had performed poorly in the past, but from the late 1980s, various reforms had been introduced which were intended to strengthen the sector.

The study further revealed that the financial sector reforms largely succeeded in terms of enhancing financial development and the expansion in size and diversity of the banking sector.

M2D, Ghanaian security provider, has announced the introduction of a Rapid Response and Support Service in Ghana.

The African Growth and Opportunity Act (AGOA) was first authorised in the United States (US) Congress in 2000, to promote export-led economic growth and development of sub-Saharan African countries and to improve US Commercial engagements with the region.

It is the cornerstone of the US-Africa economic partnership providing approximately 6,000 products from sub-Saharan Africa with a quota and duty-free access to the American market.

AGOA is a non-reciprocal and unilateral preference programme that provides duty-free access into the United States for qualifying exports from eligible African countries. In addition to the tariff preference, the legislation also requires a mandatory annual meeting between the United States and African governments to discuss trade and economic issues, known as the AGOA Forum. The 2015 Forum is to be held in Gabon. Countries are also expected to meet specific eligibility requirements to qualify for AGOA.

The programme is also s

Mobile data subscription in the country reduced marginally in February, according to latest figures released by the industry regulator, the National Communications Authority (NCA).

The management of the country's most widely spread bank, GCB Bank, has expressed optimism in the long-term prospects of the bank based on enlarged quality assets, diversification of the loan book and a long-term strategy to deliver a sustainable and profitable business intelligence in the future.

Microsoft Corporation has identified Ghana as one of its major markets where it intends to assist the youth to utilise the digital evolution to better their living standards as well as enhance the growth of the economy.

Unilever Ghana Ltd has deployed a mobile application (Mobile App), an important resource that is helping the company to manage its inventories through precision sales and distribution of products.

In a world where ideas are the cornerstones with which the strongest businesses are built, conceiving a great business idea is a giant leap towards a possible triumphant entry into the world of entrepreneurship.

Commercial banks have been urged to be proactive in their activities to help eradicate the menace of cheque fraud in the country.

Catherine Krobo- Edusei Benson: On a mission to develop a better nation through healthy eating

The first time I met Catherine Krobo-Edusei Benson she had driven to my class at Ghana Institute of Management and Public Administration (GIMPA) straight from her farm, arriving in muddy Wellington boots and carrying a basket of fresh fruit and vegetables.

Due to lack of trust in the long-term recovery of the economy, foreign and domestic investors have dumped long-term investment instruments for the short-dated ones, resulting in a consistent rise in the quantum of bids submitted during the auctioning of these securities at the Bank of Ghana (BoG).

Managers of the Millennium Challenge Corporation (MCC) have vowed to ensure that every dollar released to Ghana to improve its power sector is strictly utilised according to terms of the compact.