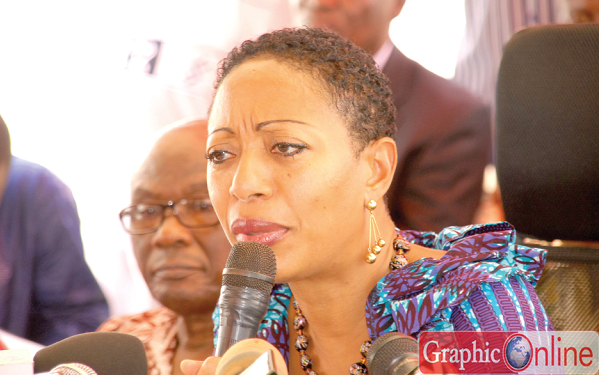 The Chairperson of Convention People’s Party (CPP), Ms Samia Nkrumah, has challenged political leaders to change the current direction of the development policy which seek their prosperity at the expense of the nation.

She explained that the country’s underdevelopment and impoverishment was only possible because of the complicity and collaboration of policy makers and political leaders who sacrificed national interest for personal gain.

Speaking at the 104th birthday celebration of Dr Kwame Nkrumah, the first President of Ghana in Accra last Friday, she urged governments to adopt economic policies that would help raise the standard of living of the ordinary Ghanaian or face growing political divide in the country.

In what could be described as a comprehensive policy statement of the CPP on the economy, she said the party rejected policies that preserve a classical colonial relation that  Ghanaians struggled to overthrow 50 years ago.

She asked why Ghanaians should adopt a policy of fiscal austerity with the consequence of high interest rates as a condition for receiving development assistance.

Ms Samia said while the development partners were urging on the country fiscal austerity, they were busy adopting the opposite, which was easy monetary system and its accompanying low interest rates to stimulate demand and create employment to promote growth in their economies.

‘’The failure of fiscal austerity measures to control inflation for the past 32 years has been experienced by all of us’’ she said, adding it was time for the country to reject fiscal austerity as the policy for targetting inflation in the long-term.

The chairperson of CPP said the party, therefore, endorsed the mid-year statement of the Trade Union Congress (TUC) on the need for a new approach to economic growth and development in the country.

She explained that trade and budget deficits do not by themselves cause inflation, saying the underlying cause of inflation in the economy is low productivity in agric-business and manufacturing, as well as shortfalls in export earning.

She stressed that either the country remained ‘’incapacitated on the intravenous drip of aid and development assistance and misdirected development policy direction or rise up to the demands and discipline required for national development and prosperity”.

Ms Samia expressed the hope that Ghanaian workers would be in the vanguards in search for national prosperity just as it was in the days of the struggle against colonial rule, adding that she prayed to see the day when workers could openly identify with the party which shared their principles on how to develop the country on self-reliance and self-determination, as well as fair opportunities for all irrespective of possession or background.

Dr Yaw Baah, Deputy Secretary General of TUC, said Dr Kwame Nkrumah deserved honour for his numerous achievements such as his government ratifying 34 out of the 50 International Labour Organisation conventions.

Dr Baah said some of the conventions Dr Nkrumah ratified were still being enjoyed by Ghanaian workers which included the right to organise and collective bargaining, as well as the abolition of forced labour and overtime allowances.