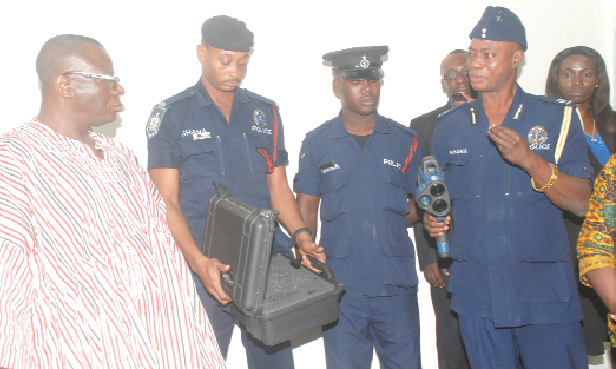 The GH¢100,000 equipment is to assist the police to enforce road traffic regulations, especially speeding and drunk-driving.

Presenting the equipment at a ceremony at the Ministry of Roads and Highways, the sector minister, Alhaji Amin Amidu Sulemani, said recklessness on the roads was unacceptable.

He advised the police to work hard and be firm in checking road offenders and to also ensure that people who flout road safety regulations and try to compromise the police by offering bribes do not have their way.

The Director General of the MTTD, Assistant Commissioner of Police (ACP) Mr Angwubotuge Awuni, who received the equipment, expressed appreciation for the donation and said the new speed guns could capture pictures from both front and back while giving the specific location, time and speed.

He promised that with the acquisition of the equipment, the police would vigorously enforce safety regulations on the roads.

He announced that the MTTD was building a database of recalcitrant drivers which would be linked to that of the Driver Vehicle and Licencing Authority (DVLA) to ensure offenders did not escape punishment.