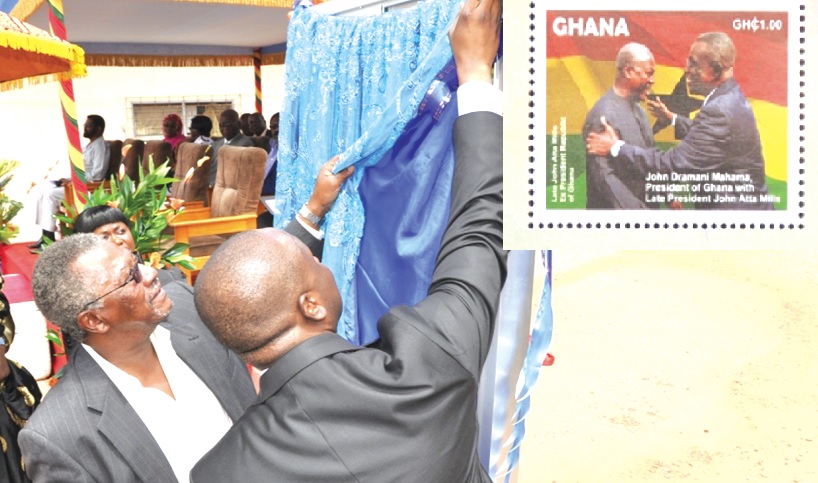 President John Evans Atta Mills has once again been honoured posthumously by the Postal and Courier Service Regulatory Commission (PCSRC) with the launch of commemorative stamps in his memory in Accra yesterday, as part of activities marking World Post Day.

The stamps depict the life story of the late president from when he was born, through his academic pursuits till he became the leader of the country.

World Post Day is observed on October 9 to mark the anniversary of the establishment of the Universal Postal Union (UPU) in 1874 in the Swiss capital, Berne.

It was declared World Post Day by the UPU Congress in Tokyo, Japan, in 1969 to create awareness of the role of the postal sector and its contribution to the socio-economic development of countries.

Welcoming guests to the ceremony, the acting Managing Director of the PCSRC, Mr Samuel Adu Boafo, said the commemorative stamps were in recognition of President Mills’ commitment to peace, social justice and political stability.

He added that for the fact that the late president’s administration led the country on the path of growth and development, he was deserving of the honour.

Mr Boafo stated that with the decline in postal services across the world, Ghana Post had formed partnership with other institutions to expand its operations.

With 356 post offices dotted across the country the Managing Director asked for government’s support in the area of delivering more of its services, particularly parcels, to the rural communities.

Mr Boafo announced that the company had started the process of automating counter services in 16 post offices, adding that the company’s mail processing technology centre was receiving a face-lift.

Among the projects in the pipeline, he indicated, were MTN mobile money transfer, Hajj parcel services and national identification card distribution.

Eulogising his late brother, Dr Cadman Mills said Professor Mills was not a deity but a humble man who loved  his country and thus served the people well. He thanked the government for the honour done the late president who died on July 24, 2012 at the age of 68.

The Minister of Communications, Dr Edward Omane-Boamah, said the government had released GH¢5 million to the company to modernise and better its operations.

He said the government’s e-payment portal to support the telecommunications sector would be launched in December this year.