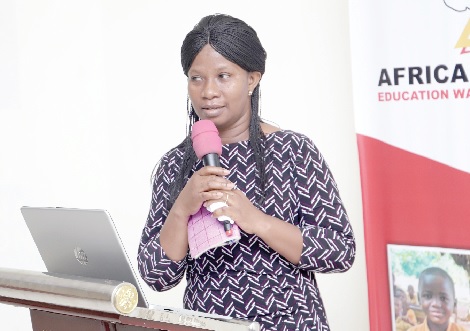 A Board member of Eduwatch, Dorothy Konadu, has appealed to the government to reconsider its decision to reduce the Domestic Violence Fund from GH¢2 million to GH¢1 million as stated in the recently passed budget.

This is because the lack of sufficient funds hugely affects the adequate provision of interventions towards addressing issues of gender-based violence, including child marriage.

Ms Konadu who made the appeal at the child marriage response system convened in Accra described the government's decision as unfortunate.

"The recently passed government budget with regard to the reduction is very unfortunate. But as Parliament begins the appropriation process, I wish to take this opportunity to appeal to the House to increase the allocation to the Domestic Violence Fund to at least the 2022 level of GH¢2 million, " she asserted.

Ms Konadu also stated that there was the need to review the national strategic framework on ending child marriage adopted by Ghana in 2016.

She explained that current data from the Ghana Statistical Service had given the indication that child marriage was still endemic.

“The Ghana Statistical Service reported that about 80,000 girls between 12 and 17 years are either married or living with a man.

“There is the need for us as a country to recognise that child marriage is a leading socio-cultural factor that keeps girls out of school. Currently, up to 49 per cent of the 1.4 million Out-Of-School children in Ghana are girls,” she said.

It is for this reason that Eduwatch, with support from Star Ghana Foundation and funding from the Foreign and Commonwealth Development Office (FCDO) conducted a scoping study into the response system to identify the strengths and challenges and make recommendations to improve it.

It was to ascertain the effectiveness of social protection and justice sector agencies response to incidents of child marriage, and how they help affected girls reintegrate into society and access justice.

The findings, which were presented by Melody Darkey, National Programmes Coordinator of Women in Law and Development in Africa (WiLDAF) Ghana, a women's rights organisation showed that there were some inconsistencies in the legal framework of the strategy, sentences or punishment meted out to offenders were not deterrent enough and people were not aware of the reporting telephone help lines.

Others were inadequate social protection cover for support for survivors such as shelters, limited resources to cater for victims and domestic violence victims having to pay for a medical or doctor’s reports.

Furthermore, the report stated that the laws should be reformed to harmonise age of consent for sex with minimum age for marriage, prosecution or conviction timelines should be extended and training and other capacity enhancement of service providers should be scaled up and sustained.

Additionally, logistics issues of service providers should be addressed, funds should be made available to expand social protection coverage, particularly shelter, to address immediate needs of victims/survivors

For her part, the Principal Programmes Officer of Star Ghana, Salifu Anatu, called on stakeholders to come together and fight the canker.

“As stakeholders, we need to commit partners to work towards the elimination of harmful cultural practices against children in Africa,” she said.