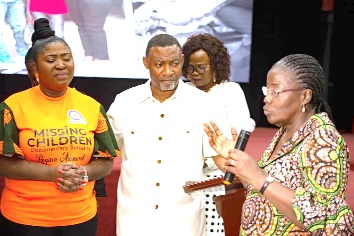 Regina Asamoah (left) with Rev. Lawrence Tetteh (middle), an international evangelist, and Matilda Amissah Arthur,­ wife of a former Vice-President, at the premiering of the documentary
30.5k Shares

A documentary that chronicles the reunification of 170 missing children with their families has been premiered in Accra.

Put together by multiple award-winning journalist, Regina Asamoah, the documentary focuses on her one-year journey since she started the “Missing Children” documentary series.

The documentary featured former President John Agyekum Kufuor; wife of a former Vice-President, Matilda Amissah-Arthur; the National Director of the Department of Social Welfare, Rev. Dr Comfort Asare; the Country Director of Plan International, Solomon Tesfamariam and former Minister of State and Executive Director of Salt and Light Ministries, Rev. Dr Joyce Aryee, who shared their thoughts on the issue of missing children in Ghana.

The Missing Children documentary series, which was first premiered on May 22, 2021, has so far reunited 170 missing children with their families.

Speaking in an interview, Regina Asamoah revealed that she felt fulfilled, having reunited 170 missing children with their families in the Greater Accra and Central regions since the inception of her Missing Children initiative.

Adjudged the 2019 Ghana Journalists Association (GJA) Best Female Journalist, Ms Asamoah decried the phenomenon of missing children in other regions, which she said, equally deserved attention according to “the Convention on the Rights of the Child.


She explained, however, that financial and logistical challenges hindered the progress of the initiative and, therefore, appealed to the government, stakeholders, and corporate Ghana to support and push the “Missing Children” agenda.

“We premiered this documentary for people to know what Missing Children is doing, and what it has achieved in the past one year, despite the hurdles.”

“The initiative has brought joy and hope to children who were trapped in orphanage homes. We need support to continue,” Ms Asamoah said.

Delivering an address, the chairperson for the event, Nana Akosua Frimpomaa Sarpong-Kumankumah, called on the government and relevant stakeholders to support the Missing Children initiative.

She commended Ms Asamoah for her efforts in reuniting missing children in Ghana with their families, and urged her to continue with the good work.

In a brief remark, the Founder of Worldwide Miracle Outreach, Rev. Dr Lawrence Tetteh, expressed his excitement over the documentary and appealed to the President of Ghana, Nana Addo Dankwah Akufo-Addo, to recognise and reward the positive impacts of the Missing Children initiative in the subsequent National Awards Scheme.

The United Nations (UN) Eminent Peace Ambassador to Ghana and Founder/Leader of Pottersville Church International, Bishop Sam Owusu, in his solidarity message, also appealed to parents to prioritise the welfare of their children. He, as well, applauded Ms Asamoah for the initiative and called on all and sundry to support it.

The Vice President of the GJA, Linda Asante Agyei, in her solidarity remarks, congratulated Ms Asamoah for depicting the core values of journalism with her impact on society, describing the act as “Solution Journalism”.