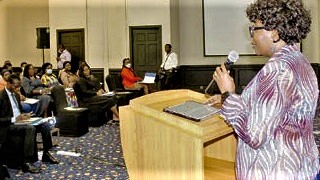 The Chief Operating Officer (COO) for the Environment and Sanitation Group of the Jospong Group of Companies, Florence Larbi, has reiterated that an affirmative action through a quota representation of females in political offices will help accelerate women’s quest to close the gender parity gap.

Mrs Larbi, who spoke at the Ghana Employers Association’s Female Future Programme Ghana (FFPGH) orientation held in Accra last Wednesday, added that women in leadership should investigate and acquire knowledge in particular fields and continuously enhance their professional and leadership abilities to improve people’s perceptions about women in leadership.

The FFPGH, organised by the Ghana Employers Association and the Confederation of Norwegian Enterprise (NHO), is a leadership and boardroom competency development programme for women which is aimed at the full utilisation of female talents in companies and organisations.

This year’s programme brought together 40 females nominated from different organisations and companies to upgrade themselves in their various fields.

Mrs Larbi said although some progress had been made internationally and locally in closing the gender parity gap through a culmination of struggles over years, there was still more work to be done.

She urged women in leadership positions to deliberately seek to mentor younger females in their teams and field of work as the lack of access to knowledgeable mentors was a hindrance to development and further urged women to advocate the implementation of legislative and legal interventions that promote the welfare of other women.

“Female leaders should be daring to accomplish their own goals without worrying about other people’s opinions. Anytime you are told you cannot do something because you are a woman, give a thousand reasons why that can be done because the inherent power of the woman creates, nurtures and transforms,” she advised.

Mrs Larbi further urged women to amplify their resolution of purpose and exude resilience, strength of character, principled and integral leadership for others to lean on.

“This is our service to God and country and we must succeed! We may not achieve gender parity in our lifetime, but the fulfilment is limitless for one who commits to this cause,” she added.

The Second Vice President of the Ghana Employers Association, Victoria Hajar, said with the support of the NHO, the Female Future Programme, which was initiated in 2019, had been established in four key countries in Africa, including Ghana.

It is currently being piloted in Tunisia,” she added.

She explained that the programme was organised into 15 sessions spread over nine months, adding that the participants would be taken through three broad modules; namely, Leadership Development, Rhetoric and Board Competence.