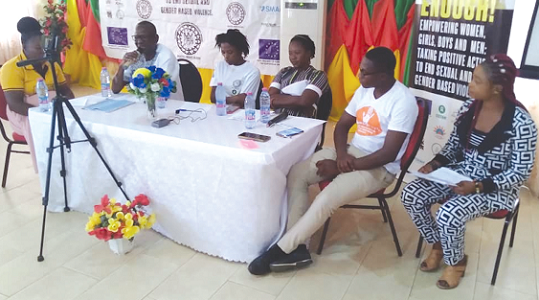 Speakers at a day’s forum have called for collective efforts towards dealing with sexual exploitation in the informal sector to safeguard the rights and dignity of particularly, those under apprenticeship.

According to them, many female apprentices were being exploited sexually, which had made the canker more prevalent in the informal sector.

They said, “there is the need for policy interventions and programmes tailored towards empowering female apprentices to be assertive and protect their rights when sexual advances are directed towards them”.

The forum was organised by the Widows and Orphans Movement (WOM), a Bolgatanga based non-governmental organisation (NGO) with support from Oxfam Ghana, Women in Law and Development (WiLDAF) Ghana with funding from the European Union as part of the Enough Project.

The Principal Investigator, Commission on Human Rights and Administrative Justice, Upper East, Edmund Alagpulinsa, said sexual exploitation had become more prevalent because of the level of vulnerability of the youth.

He therefore called on all stakeholders to take up the challenge of sexual exploitation faced by the youth and protect them against such despicable act to enable them to fully become responsible adults.

“I wish to appeal to the perpetrators of such act to put a stop to it since their criminal act do not only violate the rights and dignity of the victims but it negatively affects their personal and holistic development,” he said

He said: “The act of sexual exploitation is a heinous crime punishable by law and that people must be ready to divulge information about it to lead to the arrest of perpetrators to face prosecution”.

The Unit Head, Department of Social Welfare in the Bolgatanga East District, Paulina Agomsitiba, said due to poverty and their inability to provide their basic needs, some young girls undergoing apprenticeship suffer sexual exploitation.

She said “just as children who pursue secondary education are supported through their education, those undergoing apprenticeship training should be supported in order not for them to be taken advantage of sexually leading to unplanned pregnancies,” she said.

The Upper East Regional Secretary of the Trades Union Congress (TUC), Augustine Adongo Apambila, said the issue of sexual exploitation was of great concern to workers in the informal sector as it was an impediment to increase in productivity.

For her part, the Project Officer at WOM, Elizabeth Anafo, said the informal sector employed majority of the youth and that there was the need for young women in the sector to be sensitised to enable them to stand up against sexual exploitation.

She indicated that there was the need for the young women in the informal sector to be provided with the needed knowledge on sexual exploitation to enable to quickly report such cases for immediate action.