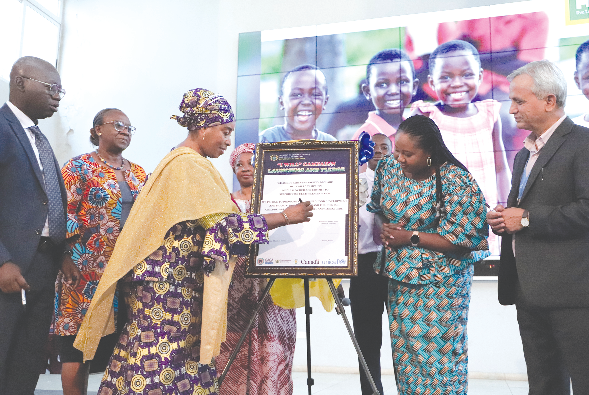 A campaign to ignite commitment to address challenges associated with early childhood development in the country has been launched at a ceremony in Accra yesterday[August 17, 2022].

Launched by the Ministry of Gender, Children and Social Protection (MoGCSP), the “I WILL” campaign will also serve as a rallying call for parents, guardians and stakeholders to increase their commitment towards quality caregiving practices for children aged zero to eight.

The campaign was launched in partnership with UNICEF, the Ghana Health Service (GHS) and the Ghana Education Service (GES).

The Minister Designate for Gender, Children and Social Protection, Hajia Lariba Zuweira Abudu, said the ministry was reviewing the early Childhood Care and Development Policy, developed in 2004, to ensure it was in line with modern trends in early childcare development sphere.

She said the draft policy would be finalised by next month for onward submission to Cabinet.

“We are looking at areas of health, nutrition, protection against violence and exploitation, issues of children with disability as well as monitoring and evaluation of programmes in the sector.

“The policy will also give roles to the various agencies and expect them to deliver within a medium term five years and long term 10 years,” she said.

In view of the “I WILL” campaign, she reiterated that the campaign would promote an integrated approach to ECD communication that would ensure that all children, especially the most vulnerable, develop their maximum potential.

“The campaign is structured to give parents and stakeholders an opportunity to pledge their commitment to implementing desirable behaviours, which will facilitate effective early childhood development in Ghana,” she said.

She said the activities for the campaign included media engagements and community engagements, orientation and training of relevant stakeholders as well as digital promotion of the campaign on various platforms.

The Chief Director of the ministry, Dr Afisah Zakariah, speaking at the event, urged stakeholders to ensure that the desired outcome of the holistic development of children was achieved.

She expressed the confidence that the campaign would increase awareness of early children development issues and strengthen commitment towards the welfare of children in the country.

The Chairperson of the Parliamentary Select Committee on Gender and Children, Francisca Oteng Mensah, for her part, called on stakeholders to contribute their quota to the cause to yield the desired results.

She indicated that the campaign was aligned with the committee's role of promoting child-related issues and ensuring a conducive legal environment for their welfare.